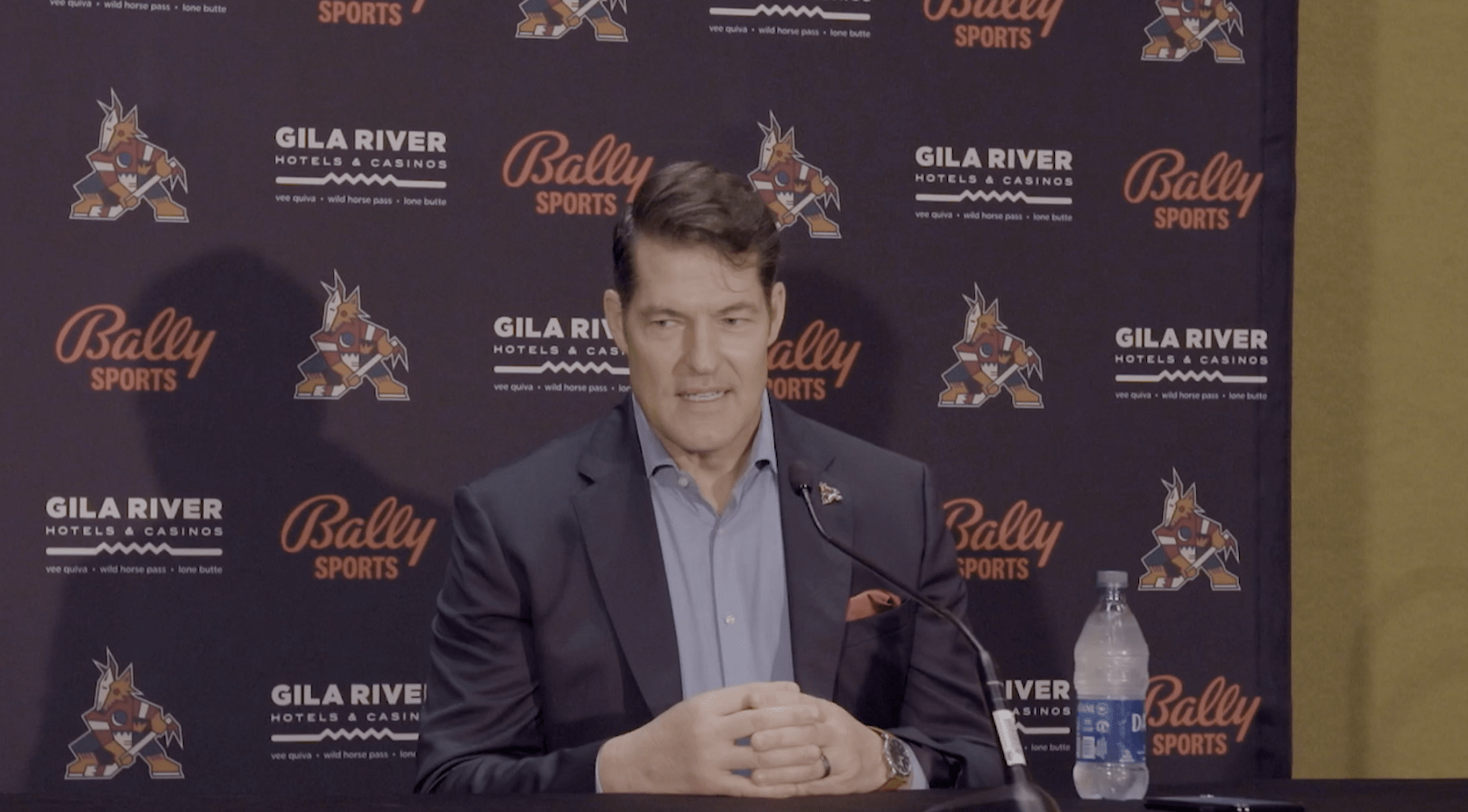 If you want a perfect tagline for this Coyotes season, Bill Armstrong delivered it when he took the podium at media day at The Renaissance hotel in Glendale on Wednesday.

“We built a hungry hockey team,” the Coyotes GM said. “Everybody coming through the door this morning, everybody has an opportunity to make the club and make an impact.

“There’s veterans that need contracts, there’s American league players that want to make the jump. Everybody has something that they are looking to get out of this season. They’re extremely hungry along with a hungry coaching staff. That’s probably the message to the team is that you’ve got a mix of different players, but they’re all hungry.”

Despite the players’ and coaches’ professional duty to deny and resist it, there are no legitimate playoff expectations for the 2021-22 Coyotes. Everything that Armstrong and his staff accomplished this offseason was with an eye toward the future, not the present. Every reasonable analysis of this roster suggests that the Coyotes will be in the mix for one of the top picks in the loaded 2022 NHL Draft.

But for the players, there are still opportunities. Aging veterans Andrew Ladd, Loui Eriksson, Anton Strålman, Jay Beagle, Antoine Roussel, Carter Hutton and Phil Kessel want to prolong their careers. Middle-aged (in NHL terms) players Dmitrij Jaškin, Johan Larsson, Ryan Dizngel, Shayne Gostisbehere and Ilya Lyubushkin want to prove that they can reach higher levels. AHL players Barrett Hayton and Victor Söderström want to prove that they are ready to make the leap, and Coyotes veterans Jakob Chychrun, Clayton Keller, Nick Schmaltz, Christian Fischer and Lawson Crouse want to prove that they can carry the team into its next era.

“I think that’s kind of a big word that you are going to hear around camp is opportunity,” Crouse said. “With a new coach, it’s that fresh-start feeling. There’s opportunity to play more, to go up in the lineup, to grow your game and I spent my whole summer looking forward to this opportunity. I’m excited to go out and show them what I have improved on and what I can do.”

From the time he was drafted in 2016 to the end of the 2020-21 season, Clayton Keller had only added about five pounds of weight. When last season ended, the Coyotes staff made it clear that he needed more strength to win battles and get to the net more frequently.

Keller took those words to heart. He said he added seven pounds of muscle in the offseason.

“I feel great; worked on my hips and all of that stuff as well,” Keller said. “I had the best summer of training that I’ve ever had. I stayed around here and trained with our guys and they really went the extra mile for us; made sure that we had everything we needed.”

Armstrong praised Keller for his work.

“Out of all the guys, he was probably the most consistent all summer in the gym,” Armstrong said. “He dedicated himself to put himself in position to go out there and impress the coach; take his game to the next level. He needed to do that, absolutely. He’s got to take the next step to put that into on-ice performance, but he has put the time in this summer.”

“I think he’ll be ready to go, hopefully by the start of the season,” Armstrong said.

Kessel arrived at the photo shoot that each player does before media day in a walking boot, with his leg resting on a scooter. Kessel is in the final year of his contract and wants to be traded, rather than endure a rebuild. The injury will clearly delay any hopes the Coyotes have of moving him.

Armstrong said that all of his players, the management staff, the coaching staff and the training staff are fully vaccinated for COVID-19. That’s a big deal because the NHL isn’t playing games with the vaccine any more. The league wants to create as safe an environment as it can for its teams. While it is their personal choice, those players or staff who won’t comply will have to live with the consequences of that choice.

The league has already made it clear that there will be a separate set of rules for unvaccinated players. At last count, there were only 15 in the league, but deputy commissioner Bill Daly told Sportsnet that a few players are in the process of getting vaccinated so the number should drop.

Per the NHL’s COVID-19 protocols:

Unvaccinated players lose one day’s pay for each day they miss, though the league will make exceptions for players who do not take a vaccine due to religious or medical reasons.

The Columbus Blue Jackets already made it clear just how seriously the league and its teams are taking this matter. Former Coyote Zac Rinaldo signed with the Jackets in August, but the team said he won’t be invited to training camp this week because of his vaccination status. Instead, Rinaldo will start this season with the Cleveland Monsters of the American Hockey League.

Jakob Chychrun was the Coyotes’ representative at the NHL’s preseason Media Tour in Chicago last week.. Each team sends one player.

Here’s a rundown of his activities, courtesy of Coyotes vice president of media relations Greg Dillard, who accompanied Chychrun to Chicago from Sept. 15-17.

“It was a great experience,” said Chychrun of acting as the face of the franchise. “It’s pretty cool when they want you to go and represent the team. It’s something I take a lot of pride in doing.”

The Coyotes released their 2021 training camp schedule. You can find that information by using this link. Arizona invited 49 players to camp. Here is the roster.