Wednesday night’s win over the Oklahoma City Thunder was anything but pretty. The shorthanded Phoenix Suns may have won by 18 points in the end, but there was little reason for an equally shorthanded Thunder squad to be hanging around for as long as they did.

Fortunately, the Suns had the best player on the floor in Devin Booker, who finished with 38 points, 7 rebounds, 5 assists and 2 blocks, all while shooting 12-for-24 from the field and 6-for-12 from 3-point range.

His night was also exemplary of the kind of historic benchmarks he’s routinely made mundane. On Wednesday, he became the seventh-youngest player in NBA history to reach 10,000 career points, with only LeBron James, Kevin Durant, Kobe Bryant, Carmelo Anthony, Tracy McGrady and Giannis Antetokounmpo getting there at a younger age.

Booker went on to joke that he’d probably be around 12,000 if his rookie head coach, Jeff Hornacek, had played him more. But listening to the 25-year-old rattle off five different head coaches’ names while thanking the people who helped him reach his latest milestone, it was hard not to marvel at how he’s grown as a true rose among weeds in the desert. Despite having five different coaches, two general managers and over 70 teammates in his first five seasons, Booker always managed to add something new to his game each year.

This season has been no different, with his 3-point shooting ascending to career-best levels. Despite being pegged as a Klay Thompson, J.J. Redick prototype coming out of college, Booker always knew there was more to his game, and he even said so at his first pre-draft workout for the Suns. He’s done nothing but prove that every step of the way since his rookie year, but in the process, the one trademark skill he was known for — spot-up 3-point shooting — fell by the wayside.

Watching Booker develop into a deft and versatile scorer from all over the floor, it felt confounding that his 3-point percentages never backed up his supposed prolificacy as a shooter. His best year as a long-range marksman came in 2017-18, when he made 38.2 percent of his 3s, but other than that, he only shot better than 36 percent from deep in a season once — until now, that is.

So far this year, Book is canning a career-high 42.8 percent of his triples, taking 6.4 attempts per game. Among all players who have taken at least 30 3-pointers, he ranks 16th in the entire league in percentage. After making six 3-pointers in a game 13 times over his first six seasons and 409 games, he’s already done it again twice this season in just 27 games.

The question is, how is he getting it done? What’s changed for a player who’s spent the last few years becoming a dominant scorer inside the arc? And how is he suddenly lights out without any discernible changes to his form or shooting motion?

For starters, continuity and familiarity goes a long way. Booker has rarely had the luxury of building chemistry with teammates because A) They were either G League-caliber or B) They weren’t around long enough. Chris Paul being back in town and the Suns keeping the vast majority of their roster intact brought order to an organization that had continually pelted Book with chaos.

From his perspective, head coach Monty Williams credited Deandre Ayton and the addition of JaVale McGee with freeing up more shots on the perimeter thanks to their rim-running gravity.

“We have two guys that dive, and you have to take those two guys into account,” Williams explained. “I think before, we’ve had guys that didn’t have that rim attack, limb presence for a lob, and it didn’t pull in the second side. I think that’s generated more 3s for us.”

Williams and the Suns’ coaching staff also deserve credit for working harder to get Booker better looks. Phoenix’s “let it fly” mentality, along with natural progressions in the games of Ayton and Mikal Bridges, takes a lot of the defensive focus off Booker.

Try as he might to deflect the attention to his teammates, Booker’s pure shooting form is getting its chance to shine now that the Suns are actively working to get him easier looks of the spot-up variety.

According to NBA.com, Book is averaging 3.1 catch-and-shoot 3-point attempts per game — his highest number since 2017-18, which was his best year shooting it from beyond the arc until now. With an uptick in frequency, he’s making a career-best 45.2 percent of his catch-and-shoot 3s.

The Suns have also done well to craft sets designed to free him up in the corner, where he’s shooting 41.4 percent this season. Booker has always been deadly from that area of the floor, making 40.4 percent of his corner 3s through his first six seasons. However, despite being so formidable on those shots, his career high in corner 3-point attempts for a season was only 59, set back in 2016-17.

This season, he’s already at 29 attempts through 27 games, putting him on pace to shatter his old career high with approximately 81 looks coming from the corners.

In the Suns’ 0.5 offense, the ball moves with purpose, which is why Booker is averaging 3.3 3-point attempts per game off of zero dribbles this season — yet again the highest average he’s posted in that category since his former career-best year back in 2017-18. Him knocking down 45.5 percent of those looks reflects how dangerous a shooter he can be when he’s actually set up.

That concept is only reinforced by examining the timing of his shots — both in terms of the shot clock and his own touches.

On touches where he’s held the ball for less than two seconds before shooting, Booker is hitting a career-best 44.3 percent of his triples, and his frequency on those shots (19 percent) is the highest its been since –any guesses? — his previous career-best year in 2017-18!

In regards to 3-point looks with seven seconds or less on the shot clock, one immediately notices that Booker has nearly chopped those attempts in half compared to his last five seasons:

Why is that important? Because the closer an attempt is to the end of the shot clock (especially from 3-point range), the more likely it’s a rushed, forced or inefficient look.

Fortunately, Booker is getting plenty of efficient chances. In fact, according to NBA.com, he’s never enjoyed this many “wide open” 3s (classified as shots where the nearest defender is 6+ feet away). He’s always been a 37-40 percent shooter on those looks, but this season, he’s made a monstrous 52.5 percent of his “wide-open” 3s, as well as a career-best 43.7 percent of his “open” 3s (nearest defender is 4-6 feet away).

“I think he’s cut out a couple of poor shots from 3 that weren’t helping his percentage, some of like the end-of-quarter, deep 3s and stuff, he’s kind of wiped those out a little bit,” acting head coach Kevin Young said Wednesday night. “But I think his base looks really strong. I think he’s really getting into his shot with some great lift, maybe even a little more probably than last year.”

That brings us to our last, and possibly most important point: Devin Booker has become a lethal 3-point shooter off the dribble. As both The Ringer’s Kevin O’Connor and The Four-Point Play’s David Nash have pointed out in recent weeks, Book has shown immense, necessary growth with his ability to hit pull-up 3s, one of the final missing pieces to his game that could catapult him from an All-Star into elite, All-NBA, downright unstoppable territory.

Through the first six seasons of his career, Devin Booker shot 31.7 percent on off-the-dribble 3s, and as O’Connor noted, he ranked 20th out of the 22 players who attempted at least 1,000 such 3s in that span. The only players worse than Book were Jordan Clarkson and Russell Westbrook.

But after shooting 31 percent on pull-up 3s in the playoffs and perhaps realizing this missing puzzle piece could help him return with a vengeance, Booker has been lights-out on this front in 2021-22. He’s shooting 41 percent on pull-up 3s, per NBA.com, which ranks sixth in the entire league among players with at least 50 such attempts.

“There were times where he created his own off the dribble, he just made some tough shots,” Williams said. “That’s what he does, but I’d say 70-80 — if not more — percent of the time, it’s just in flow out of what we do.”

Unlike his earlier years, Booker’s points do tend to come more in rhythm with the offense. There’s also no denying his ability to go out and get his own bucket at any time, and now that’s expanded to 3-point range.

In fact, his 3-point prowess is, ironically enough, what’s keeping his true-shooting percentage afloat. With Book’s 2-point efficiency down to 47.2 percent after being above 53.6 percent in each of the last three seasons, and with his free-throw percentage slightly down too, the Suns star is only at 56.9 percent true shooting — down from the 58.7 percent, career-high 61.8 percent and 58.4 percent he’s posted over the last three years.

If Devin Booker can get back to his usual dominance inside the arc, yet another career year may be in store. He’s always been a good isolation scorer, but now that he’s shooting a blistering 46.7 percent on 3-point looks coming after seven or more dribbles, he’s blossoming into a player who can get to his spots and knock down a shot from truly anywhere on the court.

“With Book, it’s just the amount of work,” Williams said. “Those guys, any time we come into the gym, it could be a smell-the-gym type day, they’re going to get up shots. I think continuity helps. Playing with Chris two years in a row, guys know where to be. Outside of that, he’s just a really good shooter. He’s one of the best shooters I’ve ever been around, so that obviously helps.” 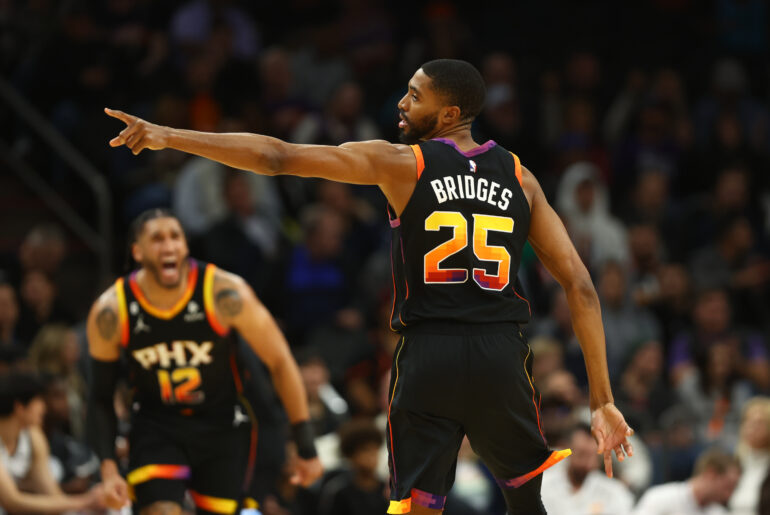 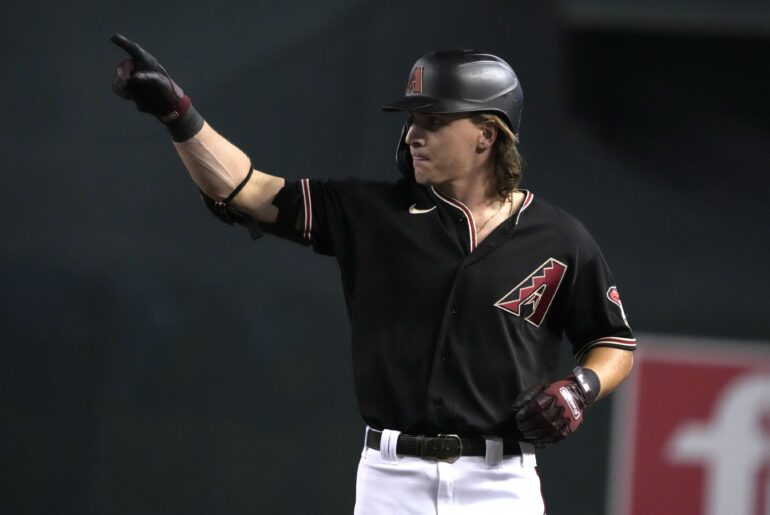