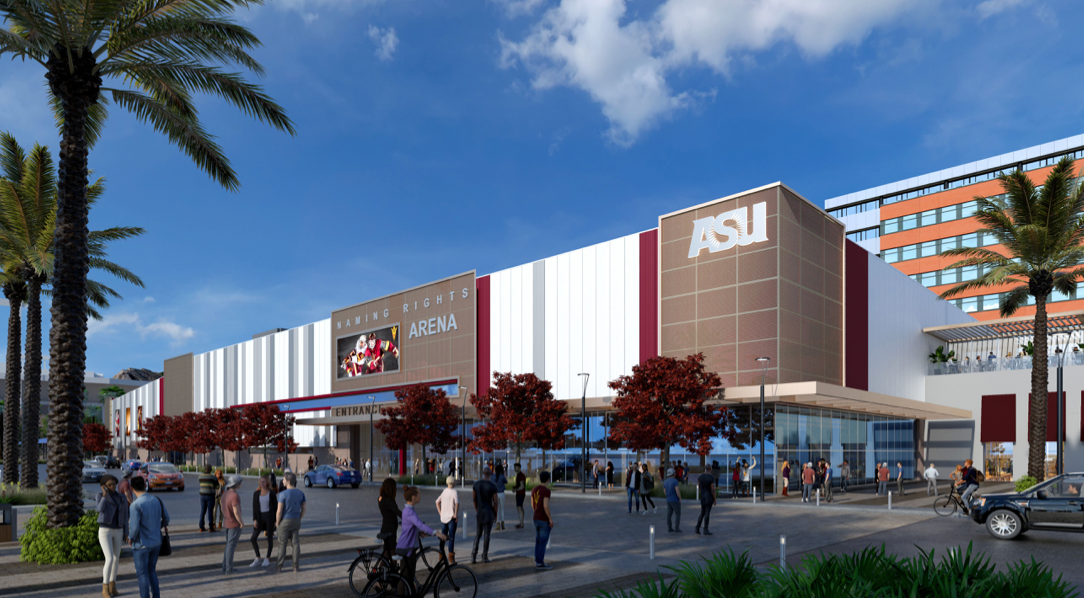 Arizona State University hosted a tour of its soon-to-open multi-purpose arena for local media on Monday. In attendance were ASU CFO Morgan Olsen, ASU athletic director Ray Anderson, Sun Devil Athletics CFO Frank Ferrara and Coyotes president and CEO Xavier Gutierrez, whose team will use the arena for at least the next three seasons as an interim home while it awaits word from the Tempe City Council on its proposed permanent home along the south bank of Rio Salado.

Reporters were allowed to take pictures and video of the interior, which is still under construction but slated for completion in October. They also saw the area off of the northeast corner of the building where the Coyotes will build their team areas which include NHL-quality home and away team dressing rooms, training areas, equipment rooms, nutrition stations, coaches’ work rooms, team storage and a fitness room.

Several other upgrades will also be made to achieve NHL standards, including reserved chilling capacity for the ice plant, enhanced broadcasting infrastructure, media and medical services, and analytics and replay capabilities.

Here is a view of the bowl.

Here is another view from the suite and press level.

Here is a video that my colleague, Steve Peters shot.

I have written extensively about this venue.

If you want a virtual tour of what it will look and feel like inside of the arena, here is a link.

If you would like to read my exclusive Q&A with Morgan Olsen after the Board of Regents approved the plan last week, follow that link.

What are your feelings about having this interim solution settled?

I certainly hope that this action and our commitment is true proof for all those folks who have had concerns and doubts that we’re fully committed to the Valley. We’re about to put in over $25 million of cash; Alex Meruelo’s money into a temporary solution. We are very hopeful that this is finally the answer people wanted to hear about our commitment to being here.

Again, it’s a temporary solution. We have a bigger vision, we have a bigger proposal out there for a more permanent facility with again, our capital on the line to ensure that taxpayers are not on the hook, that the city of Tempe is not on the hook, that this is going to be our money. We are going to be responsible for everything that is built on that permanent facility campus.

Speaking of commitment, there is the possibility that you could lose even more money in this facility than you would have at Gila River Arena with the loss of naming rights, associated arena revenues such as parking and a smaller capacity. What is your stance on that?

We are very hopeful that given the central location, given this rabid fan base, this rabid corporate base and so many community partners who have asked us to look at much more centrally located options, that the demand is there. This is a hockey town. We’ve said this from the beginning: what we’ve needed is an arena solution in order to really super serve that demand and that fan base and that fan base in waiting.

This is the beginning of what we hope will be a much more permanent solution, but this is exciting. It’s a brand new facility. It’s on a campus with 80,000 students. It’s in the heart of Tempe and we know that we will have a phenomenal experience for NHL hockey in that facility.

NHL commissioner Gary Bettman said at his news conference before the NHL All-Star Game in Las Vegas that there is one projection in which you will actually make more money than you did at Gila River Arena. Can you address that?

Commissioner Bettman said it, we’ve done our projections, and it tells you everything you need to know about the need for a more permanent facility, that by all of our projections, there will not be a material financial impact by going into this facility, and in many instances it will actually be significantly better.

How do you strike a balance between raising ticket prices to make up lost revenue in a smaller venue, and not raising them too high to alienate your fan base?

What people need to realize is that every seat is a lower-bowl seat. You only have 13 rows. So when you think of the price points of lower-bowl seats across the NHL, across live sports, we’re not going to be that far off from what people are used to paying for that closeness to the rink, to the ice and to the players. We know that there’s going to be a scarcity premium because there’s just not enough inventory, but that’s not only for the ticket holders, but also for the corporate partners, for all the folks. We’ve said it very transparently that this is the option, it is temporary, we’re willing to put our money into it and it’s going to have some difference to it. But when you think about what lower bowl seats are, what we’re projecting is not materially different from the rest of the NHL’s premium seating. You’re going to have such close, intimate proximity to players.

There has been a lot of speculation about the seating capacity for NHL games. When you do you think you will know that number?

There’s been a lot of misinformation and the reason I can say that is these great folks wearing Mortenson (Company) hats can’t even tell you what that is. We feel very confident in talking with the Oakview Group, the manager of the facility, and talking with the Mortenson, the general contractor, and the project manager here that this is going to have plenty of seating, plenty of premium seating, there’s going to be suites, about 20 or so, there’s going to be about 10 loges or so and so there’s going to be plenty of opportunity for people to come and watch the Coyotes and to have this incredible experience.  I can’t tell you what the final number is because I haven’t been told. I don’t think they know in large part because of the investment we’re making to make sure that this facility is up to NHL standards with the broadcasting, the media rooms and all those things.

Is the deal signed and complete?

We have to finalize everything that was put forth to the Board of Regents. The deal is done, the wire is literally about to be made so there is no backing out. There are no changes. It’s just a lot of documentation. For the most part, the deal is finalized. The closing is pending. And we’re excited about it.

Are you privy to the ongoing discussions between the league and the NHLPA?

You’re probably better off talking to the folks at the league office about that. All I can say to those players who have concerns is I understand it because they’re hearing from the outside that ‘This is a college arena’ and ‘It’s so small’ and ‘Do these guys really have a plan?’ I can tell you, this is a plan, we have it, and we’re willing to put our capital behind it. This is a brand new facility. This isn’t putting lipstick on a pig. This is a state-of-the-art, brand new facility. We are putting in over $25 million to make it to NHL standard. And then in addition, what else are we doing? We’re going to the Ice Den (Scottsdale) which is the practice facility, and we’re actually buying a space and turning it into our permanent workout and weight room.

Where is that space you are talking about near the Ice Den?

It’s abutting the Ice Den. It’s in the big office complex surrounding the Ice Den. We are making the commitment that you would want for the NHL standard that players expect  so those are the things that we’re showing them. We’re not going to sacrifice. This is a temporary solution but we’re committed to it.

What more can you reveal about the annex at ASU’s arena?

It’s going to be connected to the arena, but I can’t really show it to you yet. There’s going to be an entryway directly from secure parking right into it. This is going to be as secure as you would expect for an NHL team. It will be two stories and it’s 15,000 square feet.

How committed are you to keeping the Roadrunners in Tucson?

Having the Roadrunners in Arizona is certainly something that we are committed to, but there’s some challenges down in Tucson. That facility is a challenge. It doesn’t have the type of assets that you would want in order to try to make it financially viable. We have a lease there and we’re not exploring necessarily moving them until we explore what our options could potentially be.

Tucson is great. It’s a great market and we know that it supports the Roadrunners, but that facility yet again, doesn’t have the type of amenities to create the financial opportunities that we want.

What can you reveal about the renovations currently taking place at Tucson Arena?

We have had one of the highest fees on our tickets imposed by the City of Tucson for many years. Those fees were obviously intended for investment into the facility. They are now beginning to make some of that investment. We’d like to see a lot more. A lot more. As for the rest, it would be best to ask the folks down there.

You have addressed it multiple times but the airport issue keeps coming up with reports citing noise, flight-path and expansion concerns associated with your proposed permanent arena.

We’ve made it very public that the proposal that we have put forth does and will comply with the FAA. We’ve had many FAA consultants and again, we’ve been very public about that. We’re not doing anything in the dark. We’ve been very transparent.

Has the Tempe City Council received the economic, traffic, noise, gambling and other assessments for the proposed permanent arena project?

Our understanding is that they have a series of consultants, bond counsel, bond underwriters, market feasibility. It’s our understanding that they have either received it or will receive it soon. We’re not in charge. It’s a process that is out of our hands, but we remain very confident that what we have put forth is very compelling. I think the fact that we’ll be literally present in their city is quite a compelling show of our commitment, a show of our financial commitment and of our financial ability to perform. So we’re hopeful that the city will see that and move towards the next step. 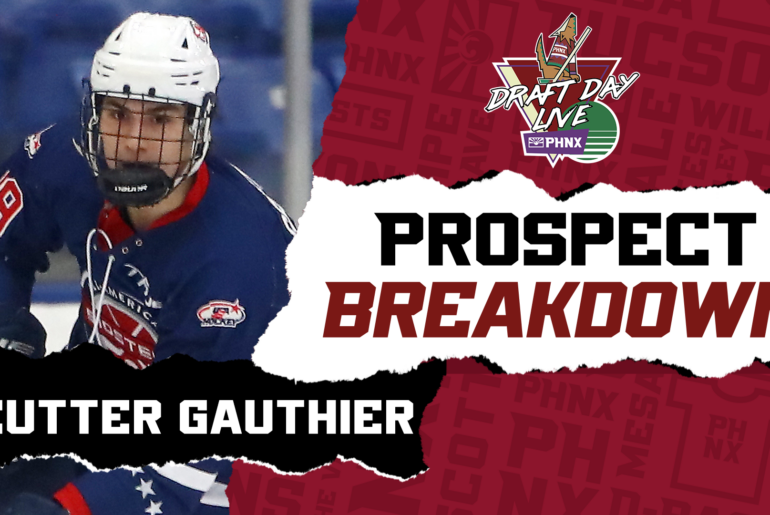 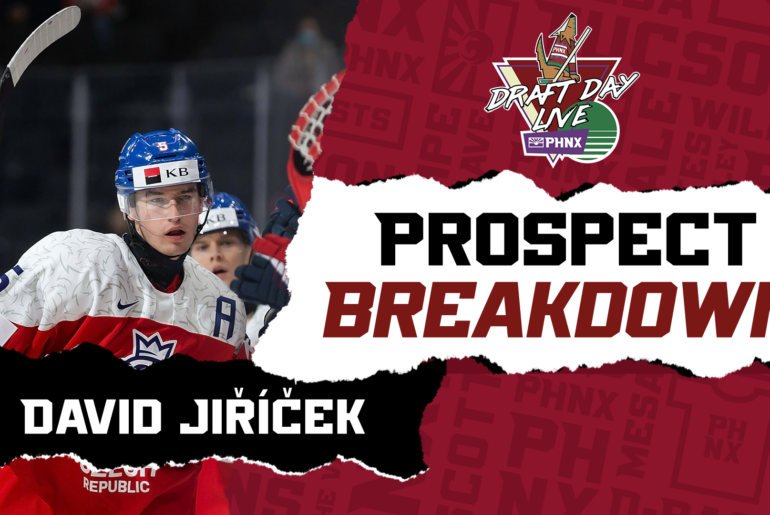 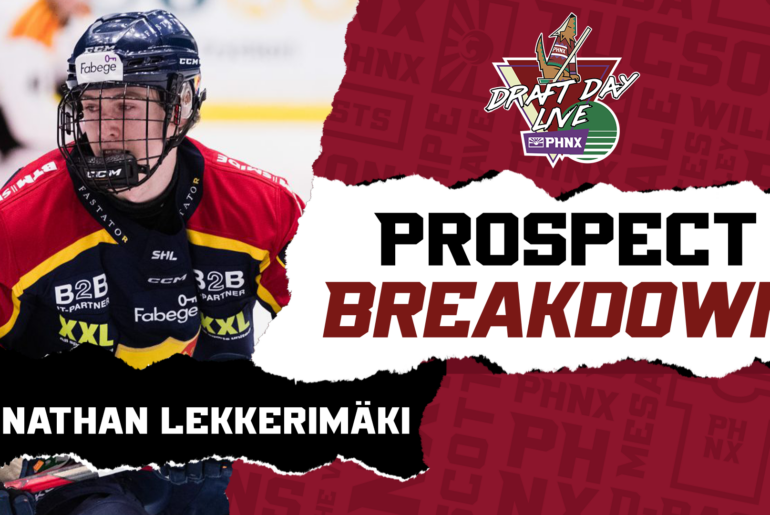