“Everything you want is on the other side of hard.”

We’ve heard Phoenix Suns coach Monty Williams say that line more than his fair share since arriving in the Valley.

The sentiment is not just a saying for Devin Booker, it’s been his way of life as a member of the Suns since his early days on the roster in 2015. As much as things have changed since then, he’s about to live it firsthand, again, thanks to the injury to his backcourt mate Chris Paul.

Suns guard Devin Booker, on Chris Paul missing at least the next 6-8 weeks with a broken thumb: “I look at the beauty of it. He gets to rest his legs. He gets to get ready for a long postseason that we’re trying to make happen.”

The beginning was hard

His first season, Booker had to deal with one of the most tumultuous years the Suns had faced up to that point, with coaching staff drama and a set of twins that make the duo of Mikal Bridges and Cam Johnson look like real-life deities.

In subsequent years, he took hate for scoring at a high volume while surrounded by the Walmart version of an NBA roster. One national talking head even described his game as “a looter in a riot.” Yeah, that was actually said.

The man had five head coaches in his first five seasons and still managed to grow each year in different facets of his game. He went from a volume scorer to an efficient assassin, from a ball-dominant guard to a distributor and from “a kid who can only score on a bad team” to a man who can help lead a good one.

He’s done this all while becoming a top-10 scorer in Suns history, top 10 in total assists in team history, having the most 30-point games in franchise history and leading the team to only their third NBA Finals ever in his first postseason.

Yeah, D-Book can do it all. 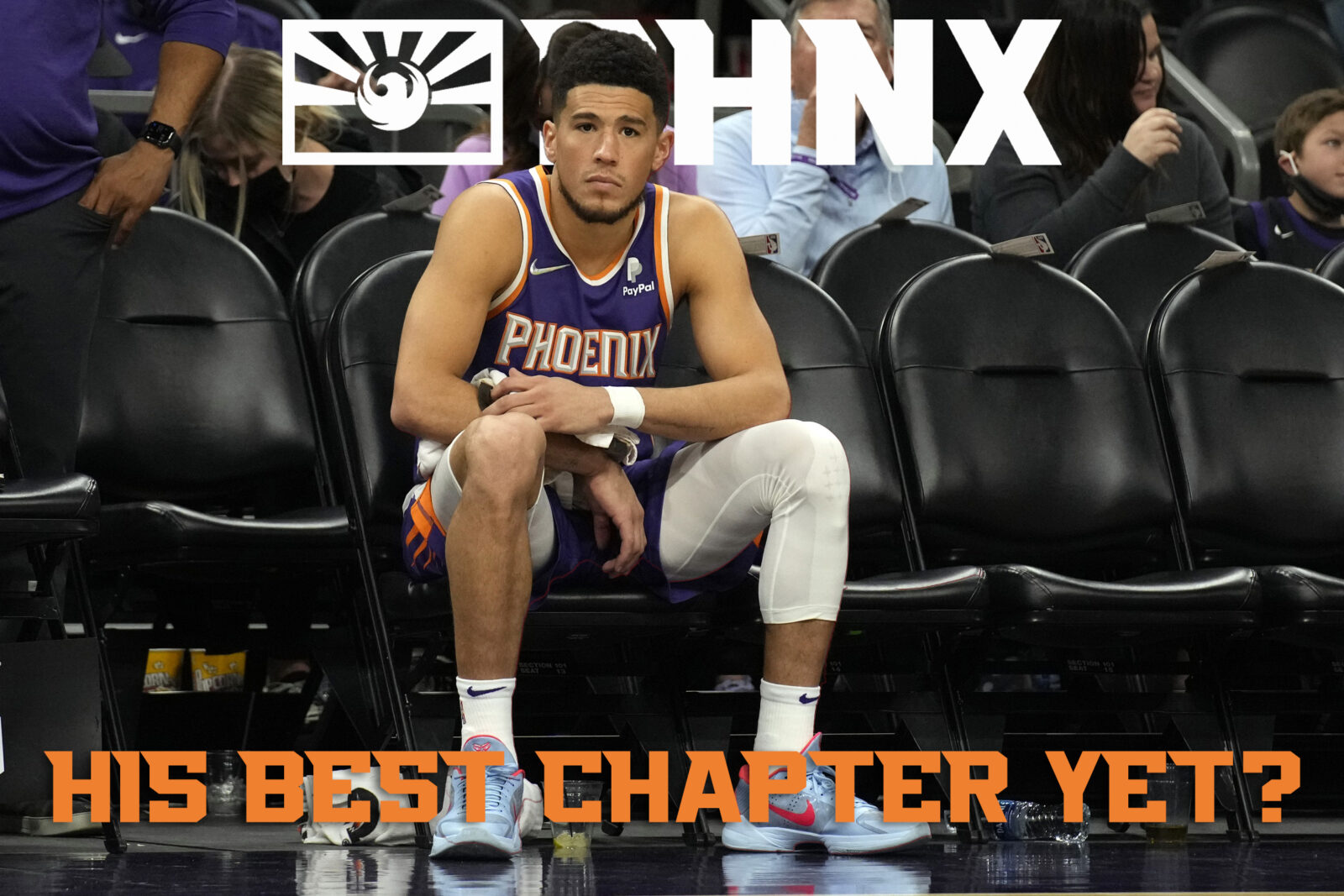 Now, thanks to the arm of Jae’Sean Tate colliding with CP3’s right thumb, he faces one of his biggest challenges yet.

Booker must show why he’s the best player on the best team in the league and that he can carry the load primarily by himself.

The old saying is, “when you have two MVP candidates, you really have none.” For most of the season, Paul and Booker have split the glory and recognition for what has happened in Phoenix the last 18 months. Right or wrong, the seventh-year swingman has garnered more national attention for who he’s courting than who he’s dominating on the court. But that could all come to an end over the next 6-8 weeks. Devin Booker could become the NBA MVP.

With the Point God on the shelf, Booker has a chance to be the savior the Suns need and the star the league wants. With a dominating end to the regular season, the guard from Moss Point could place himself squarely in the MVP conversation. By keeping the Suns in the No. 1 seed, securing the best record in franchise history and raising his average enough to potentially finish with the most points per game in franchise history (27.2), he could easily make the case that he is the best in the association, and in doing so, enter rarefied air joining Steve Nash and Charles Barkley as the franchise’s only players to win the honor.

Will it be difficult to overcome Nikola Jokic, Joel Embiid, Giannis Antetokounmpo and Stephen Curry in the race to the top? Sure. But he has head-to-head matchups with each before the end of the season to make his case. Plus, what hasn’t been difficult in his time in Phoenix? If any of us had been told back in 2015 that he’d stay with a franchise through its toughest years, drop 70 points, be well on his way to being the franchise’s greatest player ever and come out on the other end as the best player on the defending Western Conference champions, everyone would have laughed.

Just like his first NIKE commercial said, it’s only crazy until you do it.

He’s done all that, so why not climb the next mountain in front of him?

Everything he wants is on the other side of hard. Devin Booker can be the NBA MVP. It’s his time to grab it.

Greg "Espo" Esposito has been many things but conventional has never been one of them. He's our VP of Content and the host of the PHNX Suns Show. Prior to joining the team he worked for Arizona Sports, SB Nation and the Phoenix Suns as a writer and postgame radio host. He's a proud husband and #GirlDad.