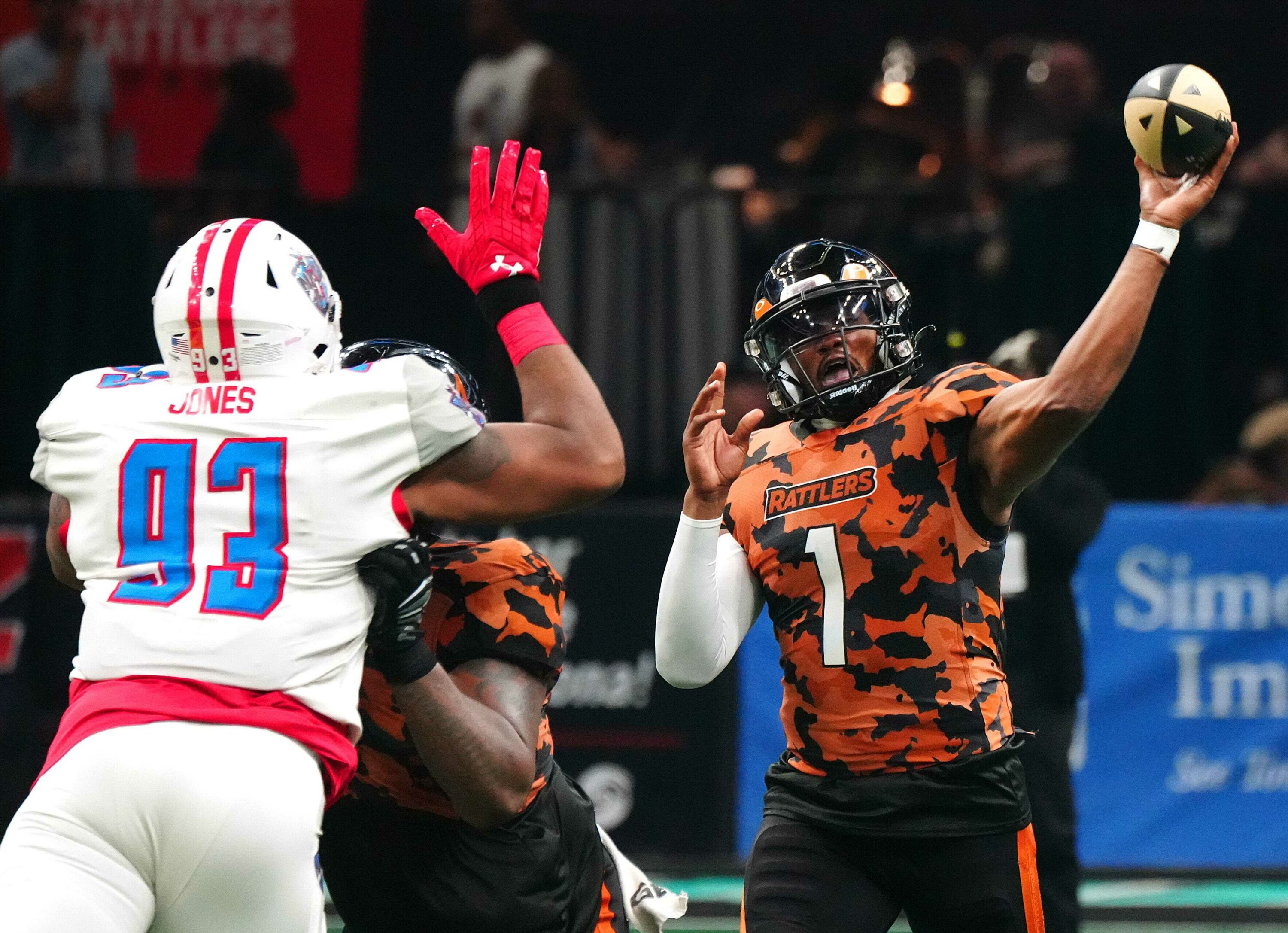 Last September, the Arizona Rattlers watched the Massachusetts Pirates take the United Bowl trophy on their own turf after the Pirates hit a game-winning field goal in overtime in the 2021 Indoor Football League championship.

The team couldn’t stop the Pirates’ momentum or minimize the damage of mistakes in that game. It led to the ultimate 37-34 loss at Footprint Center.

This year, the Rattlers have shown a different poise. The team has shown an ability to bounce back both situationally in a single game, or over the course of multiple games. In a rematch of the United Bowl earlier this season, the Rattlers were more physical than the Pirates in all facets of the game and won 59-29.

Saturday’s 40-28 win over the Northern Arizona Wranglers was a rematch of a loss the Rattlers couldn’t finish.

“When we played Northern Arizona earlier in the season we had a chance to close them out; we were up four with a minute left and we fumbled the ball away,” Rattlers coach Kevin Guy said. “We didn’t have any fumbles tonight. We’re headed in the right direction. We have a lot to work on, but I liked our mindset.”

The Rattlers forced turnovers and responded to the Wranglers’ comeback attempts late in the game.

“The poise is there,” quarterback Drew Powell said. “We have been in close games and we have lost. Our last two losses we led going into the fourth quarter, so a big mindset change for me was just finishing. We have two plays left, we have to just finish.”

Arizona’s first loss of the season came against Tucson Sugar Skulls and the last loss was against Northern Arizona. The Rattlers have avenged those two losses in the past two weeks.

Northern Arizona came into the game boasting the best defense in the IFL, led by its secondary. However, the Rattlers defense was the unit that made the difference.

“I think the biggest play of the game was when (the Wranglers) had an opportunity to go up two scores and we stuffed them on fourth down,” Guy said. “Our defense played excellent situational football there.”

The Wranglers did not score on five of their nine drives.

In the biggest moments following big plays by the Wranglers, the Rattlers defense and poise showed up. The Wranglers were driving and had a chance to build a comeback when defensive back Dillon Winfrey put the game away with a goal-line interception.

“They’d been running choice routes all day, so it was either slant or fade and (I) took away the slant and made the play,” Winfrey said. “That team is relentless, when they come back in the playoffs, I don’t expect them to lie down.”

Offensively, Powell showed his poise and ability to shrug off a bad play and rebound. Powell threw an interception early and the offense looked rattled to start against the Wranglers secondary that allows the fewest yards through the air in the IFL.

“I made two bad decisions and it was on me,” Powell said. “I told my teammates that, and they helped me settle back down.”

Powell finished 17 for 21 with 175 yards and four passing touchdowns.

“(Taking care of the ball) is the emphasis,” Powell said. “It’s going to be hard to stop us if we don’t turn it over. Even today, we were on the goal line and I could’ve reached out, but we’re going to score anyway, so I don’t have to do too much.”

Powell and the passing offense after the interception outperformed their season average.

“Like coach (Guy) said, we’re not there yet; we still have a long way to go,” wide receiver Braxton Haley said. “We’re making good strides.”

Saturday’s game might not be the last time the Rattlers see the Wranglers. The Rattlers secured home field for the first round of the playoffs, and are 12-3 with one game left. The Wranglers are 11-3 with two games left. Either team could end up hosting the other in the playoffs with both teams having won at home.