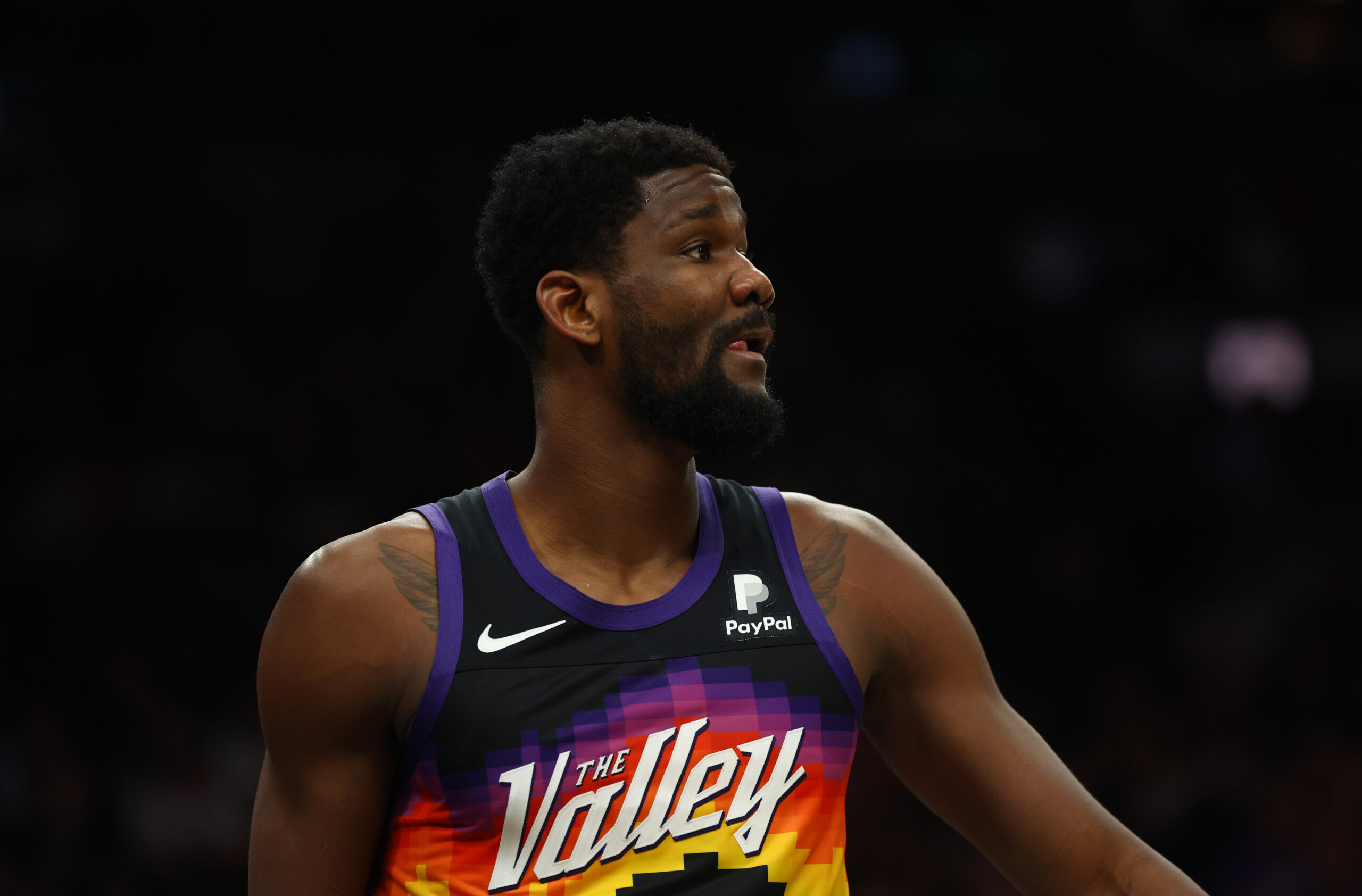 The Phoenix Suns have been focused on working out a Kevin Durant trade, but now a Deandre Ayton complication could force their hand to shift gears.

As first reported by ESPN’s Adrian Wojnarowski on Thursday, Ayton has agreed to a four-year, $133 million max offer sheet with the Indiana Pacers.

This certainly throws a wrench into Phoenix’s lofty offseason plans, but now that we’re here, it’s time to go over what this means, what the Suns’ options are and how we proceed from here.

1. Pacers haven’t signed Deandre Ayton to his offer sheet yet, but can now

Wojnarowski reported on the ESPN broadcast that Ayton had not officially signed the offer sheet yet, which is key for Phoenix. Once he signs, the Suns are locked into either matching his contract to retain him, or letting him walk for nothing.

The Pacers needed to free up cap space in order to do so, but according to Wojnarowski, they’re in the process of doing that as well:

Until Indiana officially sheds those minimal salaries to get the max cap room they need to even afford the largest offer sheet in NBA history, Ayton is unable to officially sign. Unfortunately, it’s looking like that time is closing in fast.

As long as DA still hasn’t signed it officially, Phoenix has time to make other maneuvers first.

2. There’s still time to work out a sign-and-trade

This could very well be Indiana’s push to force the Suns’ hand and work out a sign-and-trade rather than actually sign him to an offer sheet.

Myles Turner has long been projected as a potential centerpiece in an Indiana sign-and-trade for DA, and such a deal — including draft compensation of some sort — would save the Suns from matching a contract they don’t want to pay, as well as spare the Pacers from not getting their guy if and when Phoenix matches.

Still, with the Pacers waiving and stretching Malik Fitts, Jawun Morgan and Nik Stauskas, the time to negotiate a sign-and-trade is rapidly shriveling up.

In a sign-and-trade, Ayton would be signing his new contract and then being traded to another team on that contract, which is why he can only sign a four-year max in this case. His starting salary for 2022-23 would be $30.9 million, which is what his incoming contract value would be for the other team.

However, the math with sign-and-trades is more difficult thanks to “base-year compensation,” an old CBA provision meant to dissuade teams from simply signing players to contracts they intend to immediately ship out. Due to BYC, Ayton’s outgoing salary value would be half the amount of his new starting salary. So instead of the Suns shipping out $30.9 million in salary, an Ayton sign-and-trade would only count as $15.45 million in outgoing salary for Phoenix.

The opposing team would still have to send out about $24 million in salary to make the math work, or they’d have to be far enough under the salary cap to absorb Ayton’s new contract into space without passing that threshold. The Pacers fit the criteria once they officially shed those three minimal salaries.

If this is simply a play by Ayton’s people to speed up the timeline and get their guy his max money, the Suns would need to hit the gas on a potential three-team deal like this if they still want to land Kevin Durant, throwing the full bag of picks at Brooklyn to get it done:

Would four unprotected firsts and three pick swaps, on top of Mikal Bridges, Buddy Hield and Jae Crowder be enough for the Nets? Maybe not. The Suns may be forced to simply deal Ayton for Turner and a future first, and then attempt to flip that first back to the Nets in a separate KD deal.

4. Suns will have 48 hours to match after DA signs offer sheet

According to Wojnarowski, the Suns “had never made Ayton an offer, suggesting that they didn’t value him as a max player.” However, that doesn’t mean they are no longer in control of the situation.

As ESPN’s Bobby Marks points out, once Ayton signs the offer sheet, Phoenix has about 48 hours to match, which would put the deadline at 11:59 p.m. ET on Saturday. As soon as he signs, a sign-and-trade is out of the question.

If the Suns match, Ayton cannot be traded until after Jan. 15, and he has veto power on any trade. He also would not be able to be traded to the Pacers for a full year.

However, the NBA’s luxury tax threshold for next season is approximately $150.3 million, so as we’ve pointed out in the past, extending Ayton or matching any realistic offer sheet would put Phoenix in the luxury tax for the first time.

In no way should that affect their decision-making in this case. General manager James Jones said as much during his end-of-season exit interviews when asked about paying up for Devin Booker’s super-max and a potential Cam Johnson extension, but the pledge to not duck the luxury tax should still apply here.

“That’s a part of the business: As your team improves, typically your payroll increases,” Jones said. “We’re focused on improving the team, and those guys deserve the credit, they deserve the accolades and the financial rewards that come with being good players and productive players. So it doesn’t preclude us from doing anything. We’re not talking about luxury tax issues or avoiding those things. Like, that’s not something that’s going to prevent us from continuing to build this team to keep this team together.”

6. Not matching would be malpractice

If the Suns are unable to work out a sign-and-trade to either bring back additional assets for KD or straight-up lump Indiana into a blockbuster deal, their only remaining option is to bite the bullet and match.

Pure and simple: Not matching would be outright malpractice.

The reason is the Suns are already above the salary cap, which means their only avenue to replace Ayton at center would be with their $10.4 million mid-level exception. The marketplace for centers in the MLE range has completely dried up by this point, JaVale McGee is leaving for the Dallas Mavericks and only the trade market could provide a somewhat serviceable, downgrade-of-a-replacement.

Ayton is not perfect, but he’s already one of the top 5-7 centers in the NBA approaching his 24th birthday. Matching would keep the core of a contender that just won 64 games (and was the title favorite until everything fell apart) intact. That path makes a hell of a lot more sense than letting their former No. 1 overall pick walk for nothing.

DA on a max contract is an overpay in a vacuum, but that doesn’t matter anymore. The market has dictated his value, and if a sign-and-trade can’t be worked out, the only incentive to letting him walk for free would be letting emotions and bad blood dictate decision-making

Regardless of Ayton and Monty Williams’ sideline blowup late in Game 7 or the Suns’ view of paying DA a max deal, letting him walk would be a terrible basketball and business decision.

7. The Kevin Durant dream is not dead, but it’s on life support

If the Suns can’t work out a sign-and-trade to bring in additional assets for DA, the Kevin Durant dream will suffer a serious blow. True enough, the Brooklyn Nets are reportedly not interested in Ayton, so being unable to trade him until January (or losing him outright) doesn’t necessarily affect what the Nets will want in return for KD.

However, matching salaries gets much more difficult without Ayton going to a third team. It also opens the door for other hopeful KD suitors like the Toronto Raptors or Miami Heat to make their bid, potentially using Donovan Mitchell and the Utah Jazz as a third partner.

There are complications with those scenarios as well, since Ben Simmons would need to be moved elsewhere if the Nets are getting their hands on Mitchell or Bam Adebayo. But the point is, without Ayton’s salary going out to a third party in a potential Kevin Durant trade, the salary-matching math gets a lot trickier, and it gets a lot tougher to make sure every trade partner is satisfied with what they’re getting in a blockbuster move.

If Ayton signs the offer sheet, it’s almost impossible to imagine a world where the Suns trade for KD and don’t have to give up Mikal Bridges. Ditto for Cam Johnson, and ditto for Phoenix’s first-round picks. The Suns would likely have to gut a decent portion of their roster and give up four unprotected firsts and three pick swaps just to get Brooklyn to the bargaining table, and that’d still require a third team to offer the Nets an enticing young player, all while still getting compensated for their participation.

Should the Suns match Ayton’s offer sheet, they could potentially revisit these KD trade scenarios after Jan. 15, when he’s trade eligible again. But DA would have veto power over any trade he didn’t like, and that avenue could see Phoenix waste half a season dealing with constant rumors and potential locker room problems, given the way this situation has unfolded.

In short, the Durant dream isn’t dead, but it may have to be put on the back burner for a while, especially if the Suns are unable to repair their relationship with Ayton or work out a sign-and-trade before he signs that offer sheet.