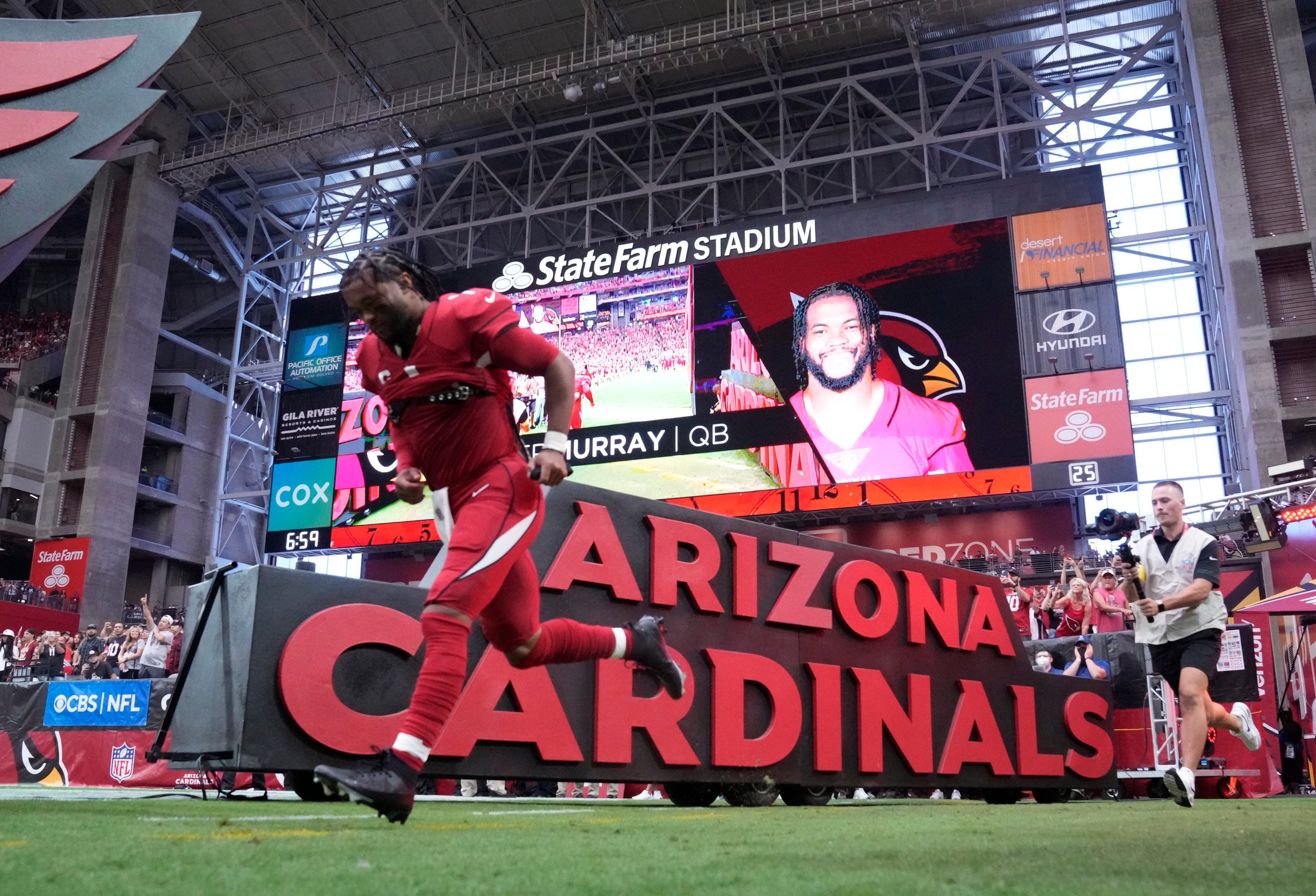 There are many ways players grow as they experience the ups and downs of an NFL season. Especially quarterbacks. Some never do. Some take more time than others.

There will be adversity, unlike what might have been happened prior to being a pro. That was certainly the case with Kyler Murray.

He never lost in high school. Hardly ever lost in college. Then comes the NFL, and despite the improvement in his first three seasons, there were still 25 losses, including last season’s forgettable playoff loss to the Rams.

As the song says, “I get knocked down, but I get up again. You are never gonna keep me down.”

Murray is taking that to heart and realizing his role is much more than just passing and running. It’s just that it became front and center very quickly this week after Sunday’s dispiriting loss to the Chiefs.

Head coach Kliff Kingsbury saw it on the practice field Wednesday as the team began preparation for Sunday’s game against the Raiders in Las Vegas.

Kingsbury said Murray is embracing “taking ownership” and added, “He knows it starts with him. That the organization made it abundantly clear that he’s the face of the franchise and everything’s gonna go through you and we got to get better. And so I definitely sense that he felt that out there today. His presence, the way he was making corrections and wanting plays run over again that weren’t right.

“I think he’s done a much better job of talking through things; not just getting mad. Now he’ll pull that guy aside and say, ‘This is what I was expecting. This is why I was mad.’ And that’s a big step as a young player, a guy that came in here without training wheels and we threw him in and he had to figure it out. But you can see that type of leadership and actually coaching guys through it. It’s really been a big step for him.”

Murray said it’s all about hating to lose.

“You can only lose so much until it starts to boil over,” he said. “This organization, since I’ve been here, we’ve gotten better each year, but it’s still not the standard how I’m used to playing. How I’m used to doing things on a football field.

“Closed mouths don’t get fed; that’s how I see it. So any way I can give my energy, give my mental (advice) to a young guy or somebody who may not be doing the right thing, I gotta do it. There is a fine line in taking what happened and taking the experience and using that to get better the next week. Coaching guys. Where did we mess up? Where can we get better? What was he thinking, what was I thinking? And grow that way.”

He understands the emphasis on every week in the NFL, while one loss in college can shatter a season, especially for playoff hopefuls.

Murray said, “Difference is in college one game matters. The NFL you can still make the playoffs. I don’t want to say those games mean more; every game matters to me, but you can’t just be down in the dumps. You’ve got to get over it You got another team the next weekend.”

He’s also learning to be a psychologist, knowing when to approach teammates.

While the outside noise after a loss like Sunday has some in the fan base wondering if the Cardinals can win another game, especially with the cavalcade of injuries that continue to cascade on the team (heck, there were even two players, wide receiver Victor Bolden Jr. and offensive lineman Rashaad Coward that were placed on the practice-squad injured list Wednesday), Murray accentuates the bright side.

“I would rather get it out the way,” he said. “Past couple years we started off kinda hot and kinda cooled off. I’d much rather go the other way. Last year, teams that won the division, the Packers (I’m not saying we are the Packers, or we’re the Titans), but they got their ass beat Week 1 too and look how they ended up.

“Look at the Bengals. Season didn’t start off too hot and they end up in the Super Bowl. Week 1 doesn’t define who you are or what you’re going to be as a team. We have to keep getting better each and every week and I think that will all take care of itself.”

We’ll find out soon enough if Murray is right, or if that pot starts boiling over very quickly.

*When Kingsbury started to be asked about Murray being frustrated Sunday, the head coach interrupted and said, “Have you ever seen him not frustrated after a loss postgame? That like a new thing for you? I haven’t either. So I see him frustrated after wins, too.”

Murray said he can get that way after a victory “if it feels ugly (and) you’re not satisfied about the game. That almost feels worse.”

*The injury report was lengthy again Wednesday with seven players not practicing, including rest days for right tackle Kelvin Beachum and center Rodney Hudson. It seems odd with all the talk about bad practice habits that two starting offensive linemen have rest days in the second week of the season. Another starting lineman, left guard Justin Pugh, was limited because of a neck injury.

Kingsbury said, “He’ll be day-to-day. He’s getting better, but I’m not sure he’ll be all the way by Sunday.” The recently acquired Cody Ford would have started against the Chiefs, but he suffered an ankle injury in practice last Thursday and was placed on reserve/injured, leading to a start for Sean Harlow.

The depth at cornerback remains non-existent, but Trayvon Mullen Jr. (toe) returned to the field, although he did very little. Additions to the report are starting safety Jalen Thompson (toe) along with wide receiver Andy Isabella (back), who both were out. Defensive end J.J. Watt (calf) remains out, as does wide receiver Rondale Moore (hamstring).

The Cardinals are being careful to ensure more damage isn’t done. Tight end Zach Ertz revealed Sunday he had a bad setback with his calf injury in camp.

Said Kingsbury, “No doubt. Once we get past Week 4, we got a bunch of guys coming off that injured reserve. So we got to hang in there until then. We don’t want to do anything drastic that could set them back for the entire season or multiple games. And so you want them out there, but you want to be smart at the same time.”

Good news was that cornerback Marco Wilson, who injured his leg late in the game, practiced fully. And that Ertz, who was on a “pitch count” Sunday and didn’t practice Wednesday, will be full-go Thursday.

“To be able to just have him going; he raises the intensity with the way he practices and plays and the juice he brings on the sideline when he’s fully into the game plan,” Kingsbury said. “I think he’ll definitely help.”

“Getting his legs back underneath him and having his savviness out there in the middle of the field. His knowledge of the game. His leadership. Having him out there is definitely huge for us. Excited for him.”

Murray on Brown having six targets against the Chiefs with four receptions for 43 yards and a late touchdown: “You watch around the league, you look at all these guys catching 10-plus balls a game, getting 10-plus targets a game. How do you do that? Gotta design it. Scheme it up. Move him around. It’ll get better.”

Kingsbury on Mullen shadowing cornerback Byron Murphy Jr. in the opening part of practice: “Just mental reps, above the neck emphasis. We call it seeing the calls and the alignment. And Murphy does a good job. Been in the system now going on four years. So he knows that he can talk him through some things. So that was basically just a walkthrough for him.”

Might he be available Sunday? “I’m not sure. He’s made good progress the last couple weeks, but we don’t want to rush him either. So we’ll make sure he’s confident learning a new system. You don’t want to put him out there unless he’s 100%. So we’ll see how it feels at the end of the week.”