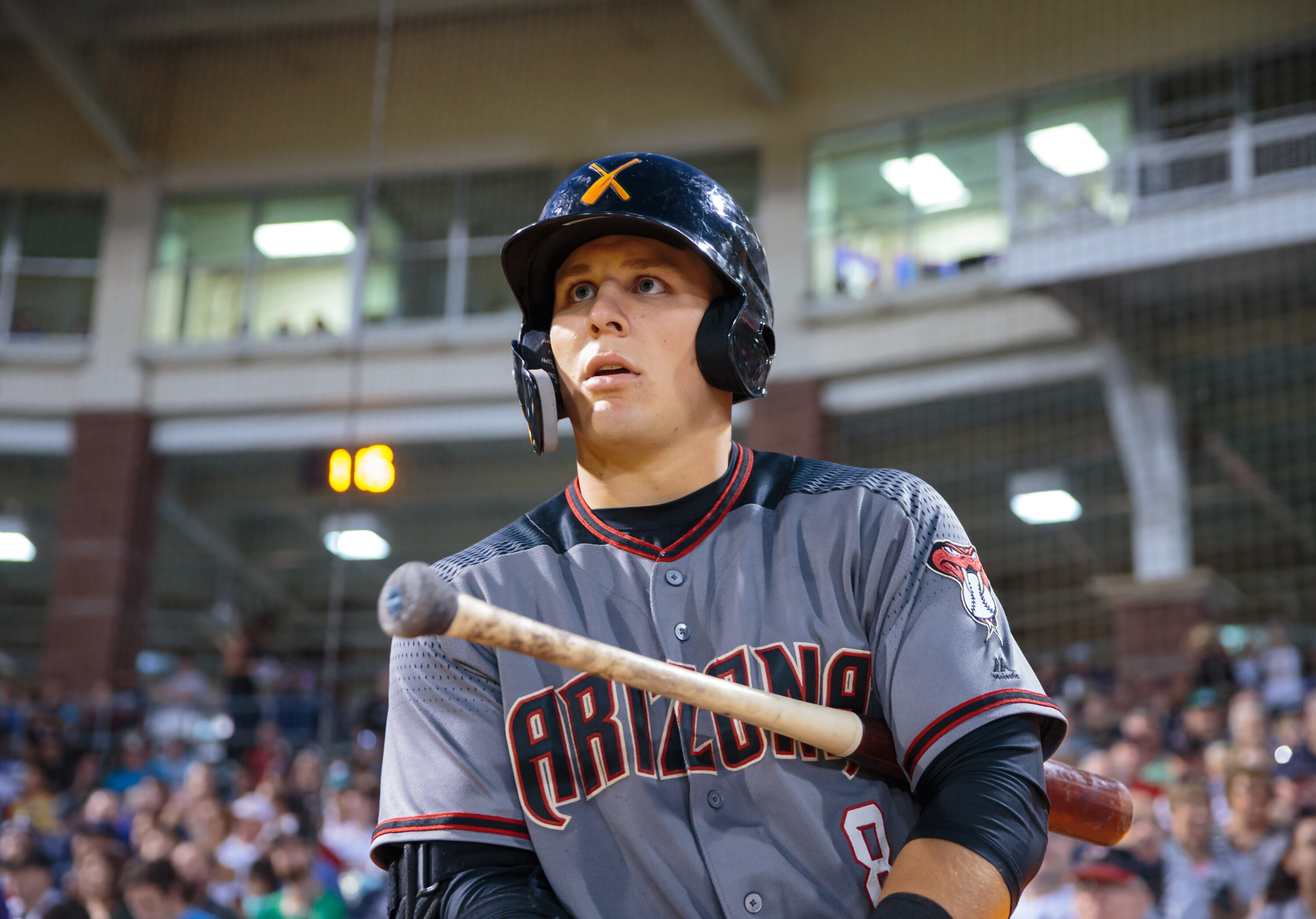 The MLB regular season is drawing to a close. That means September call-ups are showcasing their talents, playoff races are tightening and baseball’s best-kept secret — the Arizona Fall League — is drawing closer.

If you have never been to an AFL game, picture a front-row seat — you can literally sit wherever you want — to watch baseball’s brightest stars of tomorrow, all for $10 per ticket. Out of 18 hitters who started this year’s MLB All-Star Game, 12 participated in the fall league. The road to MLB stardom often passes through the AFL.

If you’re unfamiliar with the format, the AFL consists of a roughly 30-game regular season with games Monday through Saturday. In 2022, the league concludes with a semifinal on Nov. 11 and the championship game at Scottsdale Stadium on Nov. 12. The best part of the year arguably happens a week prior with the AFL Home Run Derby and the Fall Stars Game scheduled for Nov. 4 and Nov. 5, respectively.

The AFL features six teams, stationed at various spring training sights across the Valley: the Glendale Desert Dogs, Peoria Javelinas, Salt River Rafters, Surprise Saguaros, Scottsdale Scorpions and Mesa Solar Sox. Each of those teams is comprised of players from five MLB franchises, most of whom are well-regarded prospects that are a year or two away from the majors. The Diamondbacks’ selections will play for the Salt River Rafters in 2022, with home games taking place at Salt River Fields.

Between that group and everything else that the AFL has to offer, there are plenty of reasons to attend an AFL game next month. In no particular order, here are six of them.

Let’s face it, 4½ months without a local, professional baseball game is too long. In another year without playoff baseball in the desert, you are going to need help bridging the gap from the end of the regular season to the beginning of the Cactus League. Let the AFL turn that 4½-month wait into a three-month wait. The rest of the year will fly by with the holidays, and pitchers and catchers will be reporting before you know it.

Along the way, if you are interested in following the MLB postseason, there is no better way than from the MLB app in the third row behind home plate at an AFL game, hot dog in hand. You are sure to find some like-minded folks rooting for (or against) whatever team in which you have a vested interest.

Heck, you might even see a playoff team send an MLB star to the AFL on the road back from injury. The Cubs did that with Kyle Schwarber in 2016. They ended their 108-year World Series drought shortly thereafter.

Frankly, Jordan Lawlar is reason enough to attend as many Salt River Rafters games as possible. After Corbin Carroll, Lawlar is arguably the best prospect in the Diamondbacks’ farm system, and he has had an impressive first full year of pro ball.

Starting the season in rookie ball, Lawlar has worked his way up to Double-A Amarillo, hitting a total of four minor-league levels along the way. On the season, Lawlar has slashed .303/.401/.509 in 100 games with 16 homers, 62 RBI and 39 stolen bases.

For the Diamondbacks, sending Lawlar to the AFL is a bullish move. The 21-year-old has accumulated fewer than 500 plate appearances since high school, most of which came at or below Low-A. He has also struggled initially in Double-A with a .212/.299/.353 batting line in 20 games. Nonetheless, Lawlar has consistently overcome initial growing pains at every minor-league level, and it may only be a matter of time before he figures out the AFL, too. A strong showing would put him in good position to break into the majors in 2023.

Having turned 19 in June, Deyvison De Los Santos is just six months older than 2022 No. 2 overall pick Druw Jones and is currently the youngest AFL representative from any team. Once again, this is a bullish move by the Diamondbacks.

De Los Santos spent the majority of his 2022 season in Single-A Visalia before being promoted to High-A Hillsboro in mid-July. He was successful in both places, slashing .329/.370/.513 in Visalia, and .278/.307/.506 in Hillsboro, albeit with a relatively high strikeout rate and low walk rate. De Los Santos has played his past nine games in Double-A Amarillo, where he has cut down on strikeouts but also has not hit much in general.

De Los Santos might be the Diamondbacks’ third baseman of the future, and the team’s willingness to put him up against the best prospects in baseball at such a young age says a lot about how the organization views him. He has more raw power than anyone in the Diamondbacks’ farm system, and he is as fun to watch as any prospect in the organization when things are clicking.

Whether you love or hate MLB’s recently announced rule changes for 2023, the AFL will let you evaluate firsthand. That means the bases will be 18 inches wide instead of 15 inches, pitchers will have 15 seconds to start their delivery (20 seconds with runner(s) on base) and all infielders must have both feet on the infield dirt, with two on each side of the second base bag. Notably, unlike MLB’s rules for 2023, the AFL will not enforce any limits on pitcher disengagements or step-offs.

For games at Salt River Fields and Chase Field — the league has a triple-header scheduled at the latter on Oct. 15 — the AFL will also use the automatic ball-strike (ABS) system in an experimental capacity. Human umpires will still call balls and strikes, but each team will be allotted three challenges per game. When one is used, the home-plate umpire will consult the ABS system and either change or keep the call accordingly. If the challenge is successful, the initiating team retains the challenge.

While MLB will not be employing the ABS system in 2023, it is only a matter of time before we see something similar implemented in the big leagues. Get out to an AFL game for an early taste of what could be around the corner.

Aside from Lawlar and De Los Santos, the Diamondbacks are sending several interesting arms to the AFL in Bukauskas, Bakhus, Goddard and Patrick.

The most familiar name is probably Bukauskas, who was acquired in the trade that sent Zack Greinke to the Houston Astros in 2019. After an underwhelming 2021 season, a right-shoulder injury has limited Bukauskas to just 18.2 innings in 2022, the majority of which came in Triple-A Reno. The AFL will give him a chance to add to that.

In 17 appearances with the Reno Aces, Bukausas has a 2.70 ERA, 1.32 WHIP and .300/.364/.400 opponent slash line. Those numbers are respectable in the hitter-friendly Pacific Coast League, but his stuff has ticked down a bit from when the Diamondbacks acquired him. Bukauskas’ four-seamer is averaging around 93-94 MPH with spin rates coming in around 150-200 RPM lower than what he showed in the big leagues last year. Still, it was not long ago that scouts saw him as a possible backend reliever, and a strong showing in the AFL could bring those hopes back to life.

Backhus stands out as another potential bullpen arm for the future. Signed as a minor league free agent in 2021, the 24-year-old lefty has a 3.27 ERA, 1.36 WHIP and 78 strikeouts this year in 52.1 innings split between High-A Hillsboro and Double-A Amarillo. His sinker-slider combo has proven effective, and the AFL will give him a chance to test it out against better competition.

As a third-round pick in 2018, Goddard transitioned to the bullpen in 2022. Command has always been something of an issue for the 25-year-old, whose career 4.2 walks-per-nine leaves something to be desired. The AFL will give him an opportunity to make up lost innings after an injury sidelined him for roughly two months earlier in the season.

The last pitcher of the group is Patrick, who was a fourth-round selection in last year’s draft. The 24-year-old out of Purdue has been a solid starter this year, posting a 3.67 ERA and 1.27 WHIP in 10 starts split between Single-A Visalia and High-A Hillsboro. Like Goddard, Patrick missed a couple months with injury. The AFL gives him an opportunity to get in some extra work.

While we’re here, we might as well talk about Hummel, the Diamondbacks’ seventh and final AFL selection. It is not all that common for teams to send current major league players to the AFL — nor is it common for one player to play in the AFL back-to-back years — yet both are the case for the 27-year-old.

After using Hummel as an outfielder earlier in the season, the Diamondbacks have shifted back to evaluating him as a catcher, where his bat profiles better. His AFL selection figures to serve as an audition of sorts for next year’s backup catcher role. In 40 AFL plate appearances last year, Hummel walked a ton but batted just .192 with a .269 slugging percentage.

The AFL is about much more than the future of the Diamondbacks or MLB’s latest rules craze. From the off-the-charts exit velocities of Cardinals outfielder Jordan Walker to the tantalizing power-speed combo of the Reds’ Noelvi Marte, to the surprisingly monstrous raw power of 190-pound Yankees outfielder Jasson Dominguez, the fall league is a convention of present and future baseball awesomeness.

Come for the cool evening weather, stay for free reign over foul balls in the stands and do your best to remember what you see. At any given moment in any given game, a future MLB All-Star is bound to be right in front of you.