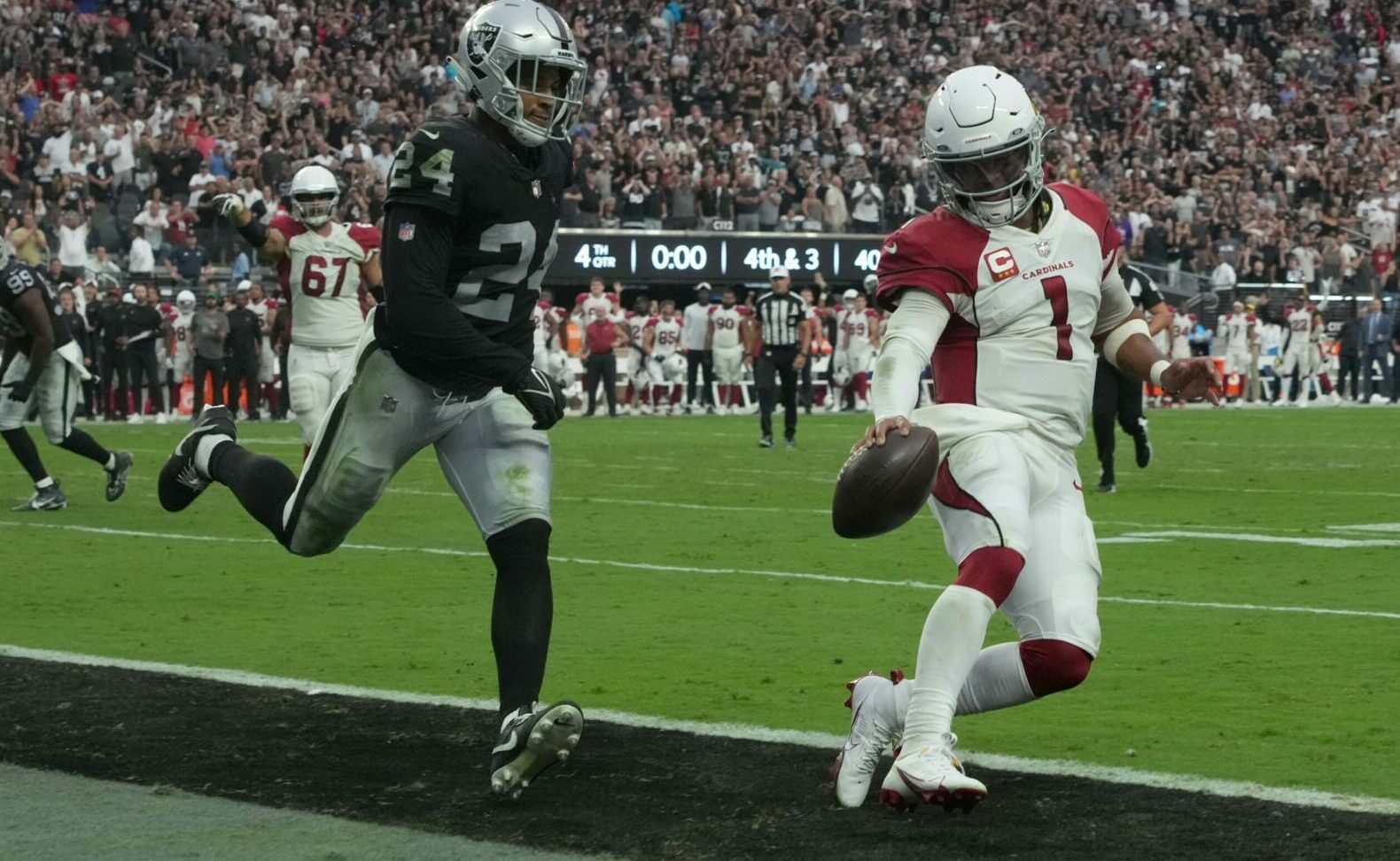 That’s what Sunday felt like, watching the Cardinals play dreadful football for the first two quarters, fall behind the Raiders 20-0 and have just as much trouble stopping quarterback Derek Carr as they did Patrick Mahomes in Week 1.

And it sure looked like this game would conclude the way last week did with another dispiriting loss, especially after the opening possession of the second half netted two yards on four plays and running back James Conner exited with an ankle injury. At that point, the Cardinals had 88 yards on 23 plays.

However, after a 258-yard first half, the Raiders went three-and-out and suddenly quarterback Kyler Murray and the Arizona offense came alive.

On an 11-play, 79-yard drive, Murray completed 5 of 7 passes for 67 yards and ran for 10, while Darrel Williams and Eno Benjamin combined for 17 yards on three carries. Murray connected with wide receiver Greg Dortch on a 5-yard touchdown pass, making the score 20-7.

A 47-yard pass interference penalty on cornerback Marco Wilson set the Raiders up at the Cardinals 18-yard line, but the drive stalled five plays later at the 7 and the Raiders settled for a field goal and a 23-7 lead.

That turned out to be what set the stage for the improbable fourth quarter during which Murray had one jaw-dropping play after another.

He added, “At some point, enough is enough. It’s not about the toughness and how hard we play; that’s never a question. This is about executing, playing faster, getting our tempo going. And I think you could tell the difference. Those guys definitely got tired. They were winded, the pass-rush slowed down a little bit obviously. They got two bookends over there (Chandler Jones and Maxx Crosby). They are great players, but when you’re tired, you’re not gonna pass-rush. They were playing zone and for us that’s a recipe for success, so it ended up working.”

Especially Crosby, who was wrecking the game in the first half with both quickness and power rushes and had three tackles, a sack, one tackle for loss and a quarterback hit. In the second half, he had only one tackle.

The Cardinals ended up with 78 plays in the game, with 59 in the second half and overtime. Against Kansas City, the Cardinals had 63 players for the entire game

Murray also credited the defense, which limited Las Vegas to 66 total yards on 23 plays in the second half and overtime. Carr was 7-for-15 for 42 yards. Wide receiver Davante Adams, who had 14 receptions on 17 targets for the Raiders in Week 1, scored on a 1-yard pass in the first quarter to complete a game-oening 11-play, 75-yard drive that bled 9:38 off the clock. But he had only two receptions on four targets for 12 yards in the first two quarters and had no catches in the second half on three targets.

“Defense got some stops,” Murray said. “We gotta play complementary football. We got to have their backs. It’s a complete team effort today. I’m just proud of how we fought and proud to come over here and get a W against a great team.”

Still, it’s difficult to comprehend the fourth quarter when the Cardinals scored two touchdowns and converted both 2-point attempts to tie the game with no time on the clock and send it to overtime.

In the final 21:09 of the game, the Cardinals gained 206 yards on 40 plays while the Raiders totaled 38 on 13 plays. Murray was 17-for-27 for 139 yards. On the first 2-point conversion, Murray ran around for 20.8 seconds and covered 84 yards according to Next Gen Stats. He later scored on a 3-yard run to bring the Cardinals to within 23-21 and then hit wide receiver A.J. Green at the back of the end zone for the tying points.

That came after Green had two drops that could have been crucial.

“If he drops the ball or not,” Murray said, “you saw I kept going back to him and then he ended up making the big play. Those are plays I know he can make. I know he trusts himself to make plays. He’s put the work in and he beats himself up for not making those plays, but I got full faith in him. I have to, I had no choice. I believe in him just like I believe in everyone out there. So we have a ton of guys that can make plays and made plays. Everybody chipped in.”

Said head coach Kliff Kingsbury of Murray, “He wasn’t going to lose. Whatever we were calling he was executing at a high level and he wanted the ball in his hands. When he’s in that mode, he’s hard to stop.”

As for the scintillating 2-point run, Kingsbury said, “We just told him to drop back and run around until somebody came open, and nobody came open. They zoned it off and he knew we had to have it, so he ran around. That’s a special talent. Not many guys on the planet could make that play.”

Murray said, “I want to say they dropped nine people. I knew they weren’t gonna be able to tackle me. It was just backyard football at that point, trying to find somebody, move around, make a play. I told the guys in the huddle, ‘We got to get this.’”

The finish. Here we are more than 1,000 words into this and we’re just now getting to the improbable ending.

The Cardinals failed on a fourth-and-1 play in overtime, their fifth attempt on that down in the game, converting there. That gave the ball to the Raiders at their own 37-yard line, needing only a field goal to win.

They got the ball to the Arizona 39 on second-and-10 when Carr connected with wide receiver Hunter Renfrow, who had fumbled two plays earlier but it was recovered by tight end Foster Moreau.

This time, after Isaiah Simmons knocked the ball loose from Renfrow, the ball bounced around two players and Byron Murphy Jr. scooped it with one hand and raced 59 yards for the winning touchdown.

Naturally, there was still some drama to come. Murphy raised the ball as he crossed the goal line and lost control, leading to a some anxious moments as the play was reviewed.

Murray said, “Man, like I told him, ‘You gotta take the ball home with you next time.’ That would have hurt, but it didn’t and we won the game.”

Murphy said he has learned an important lesson. “I saw that it was a little questionable,” he said. “But now that I’ve seen it (next time) I’m taking that ball all the way to the house to the crib back to Arizona.”

As for Simmons, he hardly played after a poor performance in Week 1, but made the game-changing play.

Murray said, “I was hoping to get back on the field, but no better way. I’d rather them do it. To see Isaiah, he wasn’t getting as many reps as he had been this week, to stay in the game, to stay locked. Just proud of him to come up big with that play, stripping the ball and then Murph had an awareness to pick it up, scoop and score. Got lucky, got lucky. But I’m just glad we won the game.”

“We asked him to practice better and we would reduce his role this week and you gotta earn it back,” Kingsbury said. “He practiced his tail off. Had the best practices he’s had as a pro. And he showed up. Biggest play of the game. Just very proud of him really attacking that challenge like he did.”

It was left to Murphy to wrap up the roller-coaster emptions of the game. When asked what he was thinking after he picked up the fumble, Murphy said, “I gotta get to the end zone to end this game. That’s all I was thinking. Just to have a team win like that, it’s the best feeling in the world.”

Surely, a skittish Red Sea agrees with that.