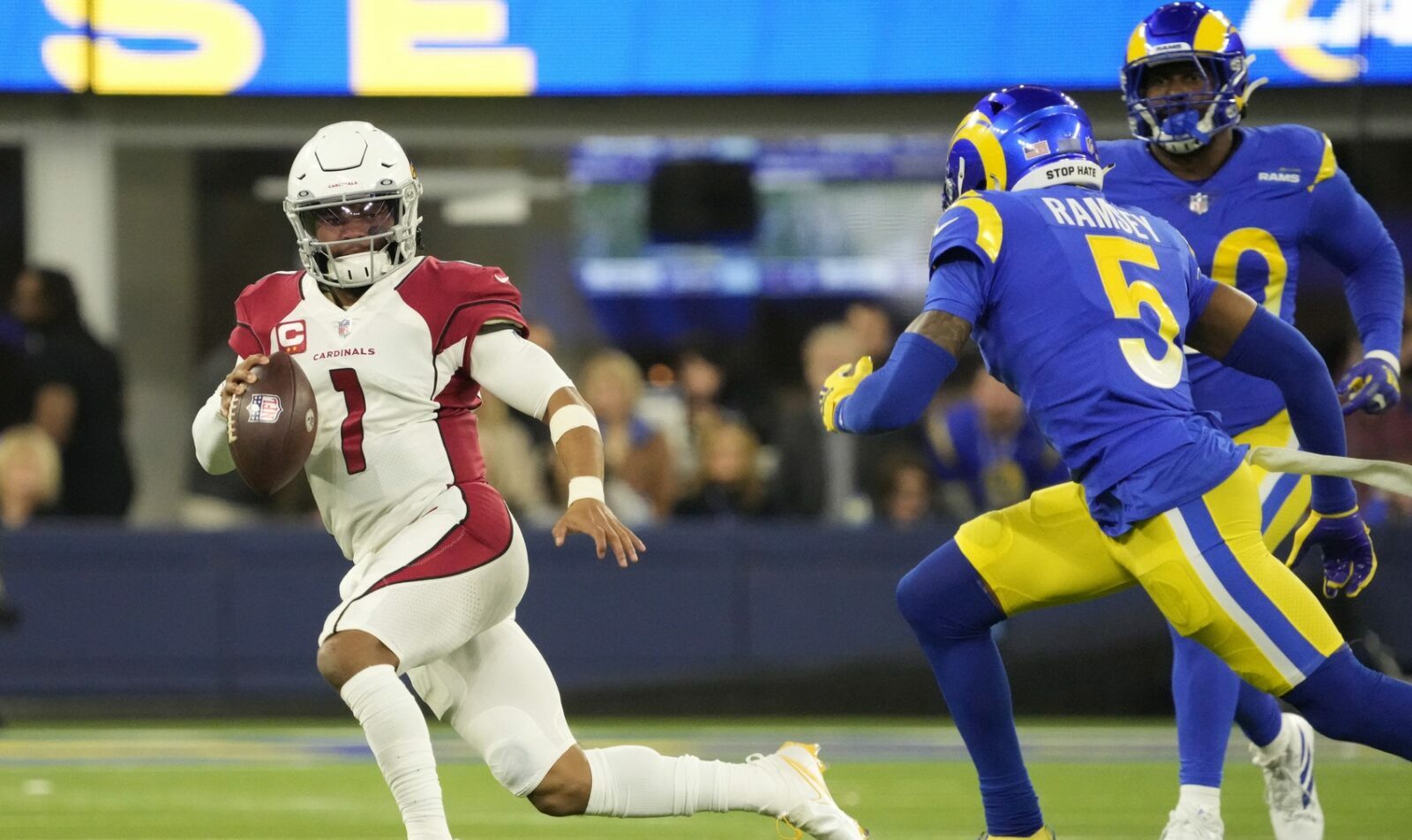 Things I hope, wonder and know about the Arizona Cardinals vs. Los Angeles Rams

Some things I hope for, some I wonder about and some I just know as the Cardinals prepare to play the division-rival Rams

That cornerback Byron Murphy Jr. has learned a big lesson after letting the ball go out of his hands as he crossed the goal line for the game-winning points Sunday in Las Vegas.

As head coach Kliff Kingsbury recounted Monday, “I was telling everybody to get in the locker room and get on the bus and get out of here. It was one of those that was bang-bang. We’ll learn from that, and luckily he’s not a meme for the next 30 years of his life.”

If running back James Conner will be able to play against the Rams Sunday after suffering an ankle injury early in the second half against the Raiders. Kingsbury said Monday Conner is the proverbial “day-to-day,” but Darrel Williams and Eno Benjamin handled themselves well. If Conner doesn’t play, rookie Keaontay Ingram could be active for the first time.

Kingsbury recently acknowledged he didn’t plan to keep five running backs on the active roster, but Ingram earned his spot.

“We saw Key in practice and preseason and how he kept coming and getting better and better, learning our protections, what he was able to do in the pass game and he’s really been a nice surprise,” Kingsbury said.

After the game Sunday, he said the plan in games will be to “see who’s hot. Those guys each can do some different things really well. And so we’ll just keep rolling. We feel really good about all of them; that’s why we kept five. But I thought Eno when he had his opportunity made some nice plays. And Darrel’s been as consistent as anybody in camp and so we’ll keep rotating those guys. And I’m sure everybody will get more playing time as the season goes on.”

That with all the focus on quarterback Kyler Murray’s indescribable 2-point run against the Raiders, there wasn’t as much talk about the laser pass to the back of the end zone that wide receiver A.J. Green caught for the game-tying points. The pass and catch might have been better than the 21-second scramble.

Kingsbury didn’t disagree. “He cut it loose,” the head coach said about the pass, and then added, “I was really proud of A.J. He’s a Hall of Fame-type caliber receiver. He played so many snaps. He was tired, had some tough drops that he usually doesn’t make, but I think he played 70, 75 snaps (actually 74), which is not what we want him to be playing. But to make that catch in that situation; K1 stepped in and threw it in there. It’s a big-time play by both of those guys.”

I also know the most important possession in the second half came with the Raiders leading 20-7. After a 47-yard pass interference penalty on cornerback Marco Wilson, they had first-and-goal at the Arizona 7-yard line. Defensive end Zach Allen stopped running back Josh Jacobs for no gain on first down, safety Jalen Thompson came up big on a second-down pass from quarterback Derek Carr to tight end Darren Waller and a third-down incomplete pass to wide receiver Hunter Renfrow was defended by Allen.

The time left in the third quarter was 1:38 after a field goal gave Las Vegas a 23-7 lead when a touchdown would have resulted in a three-score game.

Kingsbury said Monday, “That won us the game. We were out of it basically if they scored a touchdown. There (wouldn’t be) enough time to really get it done.”

Singling out Thompson, Kingsbury said, “JT had a huge play in the back of the end zone on Waller, knocking that ball out, and it was a huge defensive stand.”

“That was huge,” Allen said. “That was their only points of the second half. It’s bend, don’t break and knowing when our backs are against the wall that you can step up is huge for the confidence in the room.”

The Cardinals can figure out a way to stop Rams wide receiver Cooper Kupp like they did Davante Adams of the Raiders Sunday. Kingsbury had said last week a team can only hope to contain Adams, not stop him, but the defense did just that.

Asked how that happened and how big a role Murphy had, Kingsbury said, “We changed it up. There were times Byron was matched up. And there were other times where we were bracketing or doing different things rolling coverage that way. But to limit that guy to two catches, no matter how you’re playing him, is impressive. And I think that had a big impact on how we were able to come back in the second half.”

As for Kupp, in two games he already has 24 receptions and three touchdowns although he’s averaging only 9.8 yards per catch. Last season, his 145 receptions averaged 13.4 yards.

If the Cardinals will figure out a way to start faster, especially on offense. It’s not only at the beginning of the game, but also at the start of the second half.

The first offensive series against Kansas City netted two yards on three plays and included a run of minus-1 yard and a sack for minus-7. In the third quarter, there was one first down, but then a false start and an 11-yard sack on third down. That was a net of five yards on five plays.

The first series against the Raiders managed one first down, but after a 7-yard sack on second down resulted in third-and-14, the numbers look better because of a 10-yard play on third down. The total was 19 yards no six plays.

Then, to start the third quarter, four plays totaled two yards and there was one first down because of a Las Vegas facemask penalty.

The yards for those four possessions totaled 28 on 15 plays.

Asked about starting fast, left tackle D.J. Humphries said, “That’s the focus of the week for sure. It’s good to know we can battle back, but it definitely would be nice to get that fast start so we wouldn’t have to put so much stress on our hearts and our blood pressure.”

Not to mention the fans!

There are many people that will routinely mention veteran players with recognizable names not on rosters and implore the Cardinals to sign them at positions of need. Guys like cornerbacks Chris Harris Jr., Joe Haden and others. Or pass rusher Jason Pierre-Paul. Or interior defensive lineman Ndamukong Suh.

However, general manager Steve Keim had a realistic explanation when asked that this past Friday on Arizona Sports 98.7 FM.

He said, “We always remain active. One of those things that comes up, No. 1 is health. No. 2 is what I call get-off-the-couch money, which is a lot of times these guys have made an exorbitant amount of money and don’t want to come in and play for either the league minimum or slightly above. Where most teams are at a cap standpoint, which is we’re right around the average of primary NFL teams, you have to budget X amount for injury replacements and those sort of things.

Keim recalled the 2015 season when edge rusher Alex Okafor was injured in Week 5 at Detroit. The Cardinals were practicing at The Greenbrier resort in White Sulphur Springs, W.Va., because they had another road game the next week at Pittsburgh. They signed edge rusher Dwight Freeney, who hadn’t been with a team that year, and most important was that Freeney and then-head coach Bruce Arians had been together with the Colts.

“I’ll never forget him coming into The Greenbrier and signing him to a minimum deal, with maybe like $250,000 a sack,” keim said. “I think he had 11 sacks that year. So guys like that, that want to play, that are fierce competitors, just want to be part of a team; you have an opportunity. But there are guys obviously that it’s a monetary thing and maybe don’t feel great physically, so you have to vet the process.”

That’s one reason why Freeney, who had 125.5 sacks in his career, is a nominee as a first-time eligible player for the Pro Football Hall of Fame class of 2023.