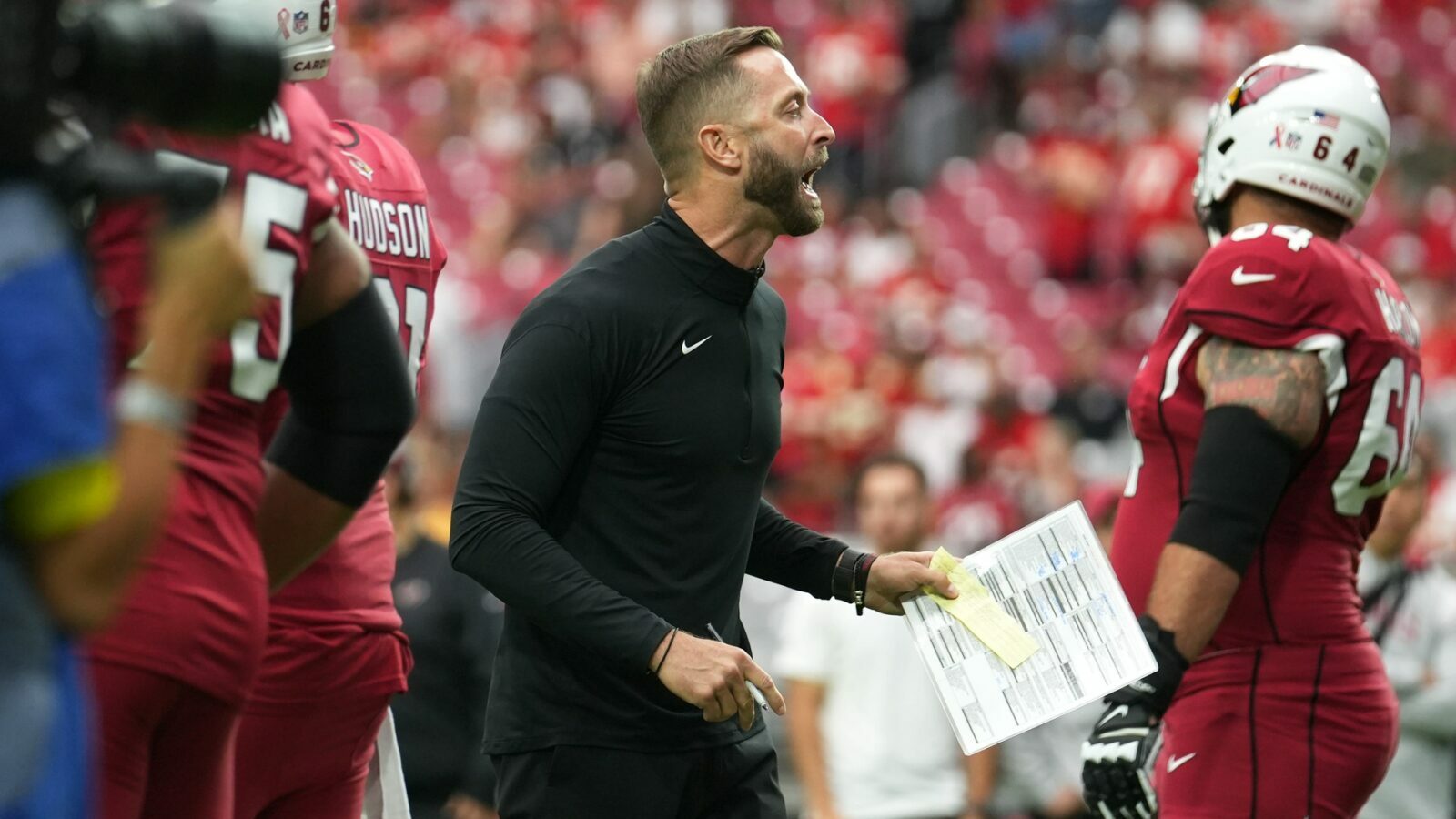 Sometimes it can be difficult to read between the lines and figure out what coaches really mean when they talk to the media.

It’s understandable when they are guarded and only communicate what they want the public and an opposing team to know.

Frequently, coaches will refuse to answer a direct query and give a response that has little to do with the question.

Cardinals head coach Kliff Kingsbury can be adept at that when he feels he has to be.

It happened this week with a question about linebacker Isaiah Simmons as it did during training camp involving center Rodney Hudson, who contemplated retirement in the offseason.

That was rumored after Hudson was a no-show for the team’s June minicamp, but wasn’t confirmed until camp started when Hudson and Kingsbury addressed the situation. The head coach was very clear that the team knew about Hudson’s thoughts and that they gave him time and space to decide.

However, it left one major question answered: why was Hudson’s absence considered “unexcused,” according to Kingsbury in June when they knew full well he was making a decision about his career.

Of course, when Kingsbury was asked directly about it being “unexcused,” he didn’t answer that question and merely repeated what he previously said that day.

With Simmons, it came this week after he played only 15 snaps against the Raiders, a game in which he forced the fumble on the last play of the game that cornerback Byron Murphy Jr. recovered and returned for the game-winning 59-yard touchdown.

After the game, Kingsbury said, “We asked him to practice better and we would reduce his role this week and you gotta earn it back. He practiced his tail off. Had the best practices he’s had as a pro. And he showed up. Biggest play of the game. Just very proud of him really attacking that challenge like he did.”

That came amid the explanation last week that the defensive issues against Kansas City in the season opener were due to communication problems and the whole operation being off kilter. Coordinator Vance Joseph said, “We couldn’t get lined up; the calls were coming out slow.”

Simmons was the one relaying the calls, but no one outside the team knew his role would be reduced in Week 2.

The question was raised here last week whether the Cardinals were asking too much of Simmons by having the green dot on his helmet.

So it was that Kingsbury was asked directly about that Monday: did the fact he was responsible for relaying the play and making sure everyone was where they were supposed to be have an effect on his performance.

Once again, that question wasn’t answered.

He responded, “I would say he just had his best week of practice. Last week was an eye opener and he got back to the basics and was focused and studied and worked really hard at practice and came out and played at a high level. There were things we asked him to do. And obviously the two plays at the end were huge plays and really helped us win the game.”

Considering the varied role he had as the “star” linebacker and being asked to do different things, Kingsbury was asked if he was worried if Simmons was being given whiplash.

He first joked, “I think he’s giving us whiplash,” and then continued, “He can be as good as he wants to be; I’ll say that. And he knows how we feel about him. We’ve addressed it many times. I think it’s a commitment to football all day, every day, and being the best possible player you can be and you see the flashes.

“And I think if he can do that consistently, day in day out, the sky’s the limit. And I think that’s how we’ve all felt since he got here. So it was a big step in the right direction. And I hope it continues.”

As for that hope, after practice Wednesday, Kingsbury was asked if Simmons’ role might increase Sunday against the Rams based on what he does in practice this week.

“We’re gonna do whatever is best for the team,” he said. “We were all excited about how he played and the progress he made. And (making) one of the biggest plays of the game, if not the biggest, and we felt like that was attributed to the great week of practice he had. He had another good day today, so we’re going to keep him moving and we see what the ceiling can be. And we want to get him there.”

Clearly, they aren’t the only ones.

*At the first practice of the week Wednesday, six offensive players had rest days: tight end Zach Ertz, wide receivers Marquise Brown and A.J. Green, left guard Justin Pugh, center Rodney Hudson and right tackle Kelvin Beachum. The offensive linemen played all 87 snaps against the Raiders, while Brown played 81, Green 74 and Ertz 73. Pugh and Ertz were also coming off injuries. Green was on the field for warmups Wednesday, but didn’t participate after that.

Kingsbury said, “(It was) a long game. They did the walkthroughs, got mental reps and they’ll be out there tomorrow.”

Wide receiver Rondale Moore (hamstring) missed practice, while running back James Conner (ankle) took part in warmups but then went inside. Wide receiver Andy Isabella, who was inactive against the Raiders because of a back injury, practiced fully and said afterward he feels good and will be ready Sunday.

On Moore, Kingsbury didn’t rule him out for this week. “We got to just see how this progresses,” he said. “He’s a guy that’s very cerebral, knows the system, so if he can go by Friday, Saturday, I think we’d feel good about it.”

Conner might get some work in Thursday. Kingsbury said, “He’s doing OK. We’ll try to get him doing something tomorrow and see how it goes.”

It was thought that cornerback Trayvon Mullen Jr. might play against the Raiders, but he was inactive. Asked if he was close to playing in Las Vegas and what the prospects are for this week, Kingsbury said, “He’s getting closer, at least physically. Mentally, he’s got to get in our system, learn the calls and feel comfortable doing that, particularly against a Rams offense that is so talented.

“(Head coach) Sean (McVay) does a great job of moving people around, finding matchups, doing different things. So we’ll see how the week progresses. And if it’s not this week, hopefully next week he can contribute.”

*Cardinals left tackle D.J. Humphries regaled the media Tuesday with his tale of what happened at the end of the game Sunday against the Raiders when cornerback Byron Murphy Jr. ended the game with the fumble return for a touchdown.

He first related that he almost ran on the field, “but I didn’t want to be that guy” and get a penalty for having too many players on the field.

Humphries then said, “The funniest part was everybody else was running to Murph and Justin Pugh was running the other way because there was this dude behind our bench that was talking junk the whole game. It felt like he was on the bench, like he was sitting directly behind the bench; that’s how close he was. That’s how loud he was. Pugh literally beelined to him after the game. He let him hear it. I wasn’t over there for it, but I saw him run past me.

“I ran past him and I thought that doesn’t make sense. After he explained it to me, what it was, I said, ‘I was so glad you went over there. I was ignoring him the whole game, I was doing such a good job of ignoring him. And I’m so glad you went right to him after the game.’”

When Humphries asked if the guy was heckling, he said, “He was a heckler, but it was like not good material. You know how sometimes you get heckled and you think, ‘He’s killing me right now.’ He would actually banter the whole time. Every time we would come to the sideline, it was non-stop. But it was awful. It was all like cringe stuff. He needs to go learn from the guys in Cleveland or Buffalo and learn how to talk trash.”

When asked if Pugh told him what he said, Humphries said, “He did, but we would not have enough bleeps to explain what he said. He got the message for sure.”

Pugh confirmed the story, the number of bleeps there were, and said, “He was a front-runner and only started talking when it got to be 20-0. At the end, he got real quiet.”

Kingsbury on trying to prepare to play Rams perennial All-Pro defensive lineman Aaron Donald, “Nobody has a plan for that. We’ll do our best just like everybody else, but he’s kind of an unstoppable force. And you got to make sure he doesn’t just completely wreck the game.”

Quarterback Kyler Murray on the postgame incident where a fan swiped his face with a hand: “Stuff happens fast. I know every person that I’ve hit in the face, I did it for a reason. I don’t know if probably didn’t know where he was. I don’t know. It was a pretty live game. Vegas is Vegas. I’m sure he was having fun. But, I don’t think any player should be getting touched in that manner. But no hard feelings towards the guy. If I’d see him, I’d shake his hand.”