Jake Guentzel doesn’t need approval from his dad, Mike, who is a pro scout for the Coyotes. Over the past five seasons, only 10 players in the NHL have scored more goals than the Pittsburgh Penguins’ vastly underappreciated wing.

With his dad in town for the Coyotes pro scout meetings, and in attendance at Mullett Arena for Sunday’s Coyotes-Penguins game, however, Jake put on a show. Guentzel scored two, second-period goals and the Penguins snapped a six-game losing streak with a 4-1 win against the Coyotes.

The loss was the fifth straight for the Coyotes, who have been outscored 22-9 during the skid. The loss also snapped the Coyotes’ three-game winning streak at home.

“I saw a really good effort,” Coyotes coach André Tourigny said. “I saw a lot of passion, a lot of pride, we defended really well, we played against a team that’s tough to play against defensively.

“They put a lot of pucks to the slot, a lot of pucks to the net and we won a lot of net-front battles. We defended on our penalty killing really, really solid against elite players. We created a lot of good offense. We had breakaways, we had good looks, shots from the slot. We had about everything — rebounds, screenshots — we just could not score so for me it’s just one of those nights where you play your A-game, you play against a really good opponent, it was a hell of a game. Both sides played well. Both sides played with a lot of urgency. We just could not find a way to score the big goal.”

The loss spoiled the return of Dylan Guenther to the lineup, fresh off a gold medal with Canada at the Junior World Championship. Guenther, Tourigny and GM Bill Armstrong all addressed the path ahead for the Coyotes’ key prospect.

Dylan Guenther could have taken some time off before rejoining the Coyotes. Nobody would have blamed him.

Guenther took part in a crash-course training camp that began on Dec. 9, he played a handful of exhibition games and then played seven high-stakes games in an 11-day span before scoring the golden goal in Canada’s World Junior Championship.

Instead of taking that well deserved break, Guenther was on a plane back to Arizona on Friday; the day after Canada beat Czechia 3-2 in overtime to secure the nation’s 20th gold medal at the event.

“I guess I just don’t really think about breaks,” Guenther said before Sunday’s game. “That was a pretty cool part of my life; a good experience and now I’m back here, playing against [Sidney] Crosby tonight.” 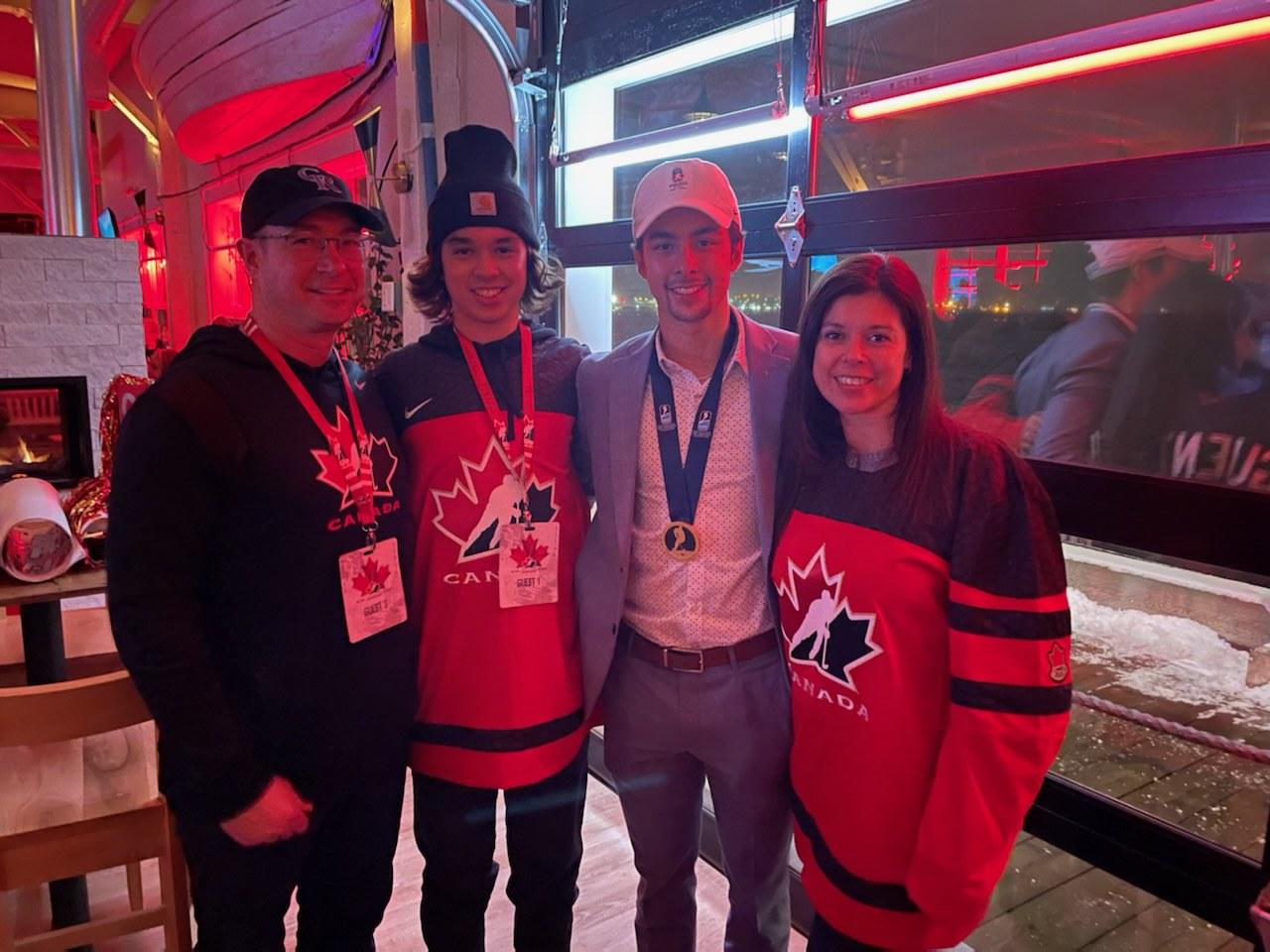 Guenther had some time to hang out with his parents (Russ and Nadine) and brother (Nathan) during down time at the tournament. He also got to celebrate with them afterward, but he said that his plan all along was to return to Arizona right after the event.

There had been plenty of discussion internally and externally about how the Coyotes might manage Guenther once he returned. There was talk of a two-week conditioning stint in Tucson. There was talk of limiting his games to less than 40 so that the Coyotes could maintain control of their asset for an additional season before he was eligible for unrestricted free agency. There was even talk of sending him back to the WHL.

Forget all of that, GM Bill Armstrong said. Guenther is here to play.

“He’s got to adjust to the strength and the lack of space and time in the NHL so he’ll have his work cut out for him, but I’m not worried about games played or when he becomes a free agent or anything like that,” Armstrong said. “Now it’s just about developing and digging in and getting bigger and stronger. We’ll monitor him every five or 10 games to see what level he’s at and can he contribute and play a certain amount of minutes in the NHL. That’s your only worry. You just want kids to thrive. You don’t want them to survive.”

When Barrett Hayton played in the 2020 World Junior Championship for Canada, the hope was that he would gain some momentum and confidence from that event and carry it back to the remainder of his NHL season. He scored the game-tying goal against Russia in the gold-medal game. Unfortunately, he also sustained a shoulder separation in the previous game that shelved him for about a month when he returned and he lost all of that momentum.

With Guenther hopping right back into the lineup, there is hope that scoring two goals in the gold-medal game and tying for the second most goals in the tournament (seven) with fellow Coyotes prospect Logan Cooley will propel him to bigger things.

“He came up big in a key moment when it mattered the most,” coach André Tourigny said. “That was the goal was to send him over there to live that experience and to have the pressure and to live the emotion. I think you want your player to go through that.

“It doesn’t happen that often for professional athletes to have a chance to win a Stanley Cup or gold medal or something like that. That builds your pedigree, builds your character. You learn a lot. You learn how to react under pressure. They went through a lot of adversity through the journey and I think he will come come back way better, way stronger mentally with way more experience. Championships build champions.”

Too many Coyotes on the ice

Entering Sunday’s game against the Penguins, the Coyotes led the NHL in too-many-men-on-the-ice penalties, per NHL Stats.

Coyotes opponents have scored three times on the subsequent power plays for those particular infractions.

There has been much speculation over whether Tourigny’s 11 forward-seven defensemen lineup is contributing to the high number of penalties. Critics wonder if it is causing confusion among the players on the bench when the lineups and pairs are constantly being juggled.

Tourigny dismissed that assessment with a scoff.

“It has nothing to do with the alignment,” he said. “Early on in the season we were walking the line all the time so I was not surprised we got caught because we were changing early and we were extending our changes and we paid for it. We had a bad stretch but lately we are much better. We’ve had a few terrible reads, a few times where we were not focused and we cannot explain that where there’s nobody changing and a sixth guy jumps on the ice.”

Tourigny was not about to name names but it’s clear that he chalks these infractions up to dumb mental errors that have nothing to do with confusion over who is supposed to be out on the ice next. 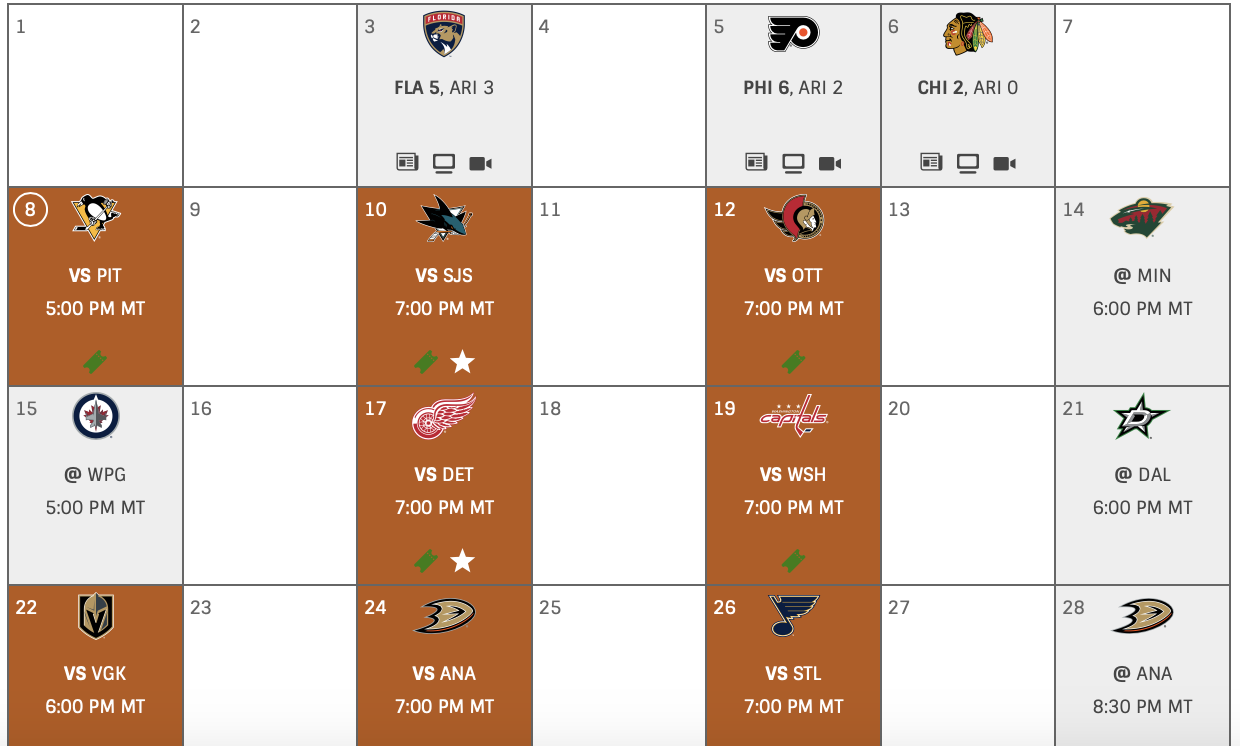 The Coyotes are in the midst of a stretch in which they play 15 games in 26 days before the All-Star break. That puts a tremendous strain on everyone involved in the hockey operations staff. It is both mentally and physically exhausting and it limits practice time to iron out bad habits that creep into a team’s play.

As an example, the Coyotes have not had a practice or morning skate since Jan. 4 and they won’t have one on Monday because rest is so critical during this stretch.

Here’s how Tourigny and his staff view the situation.

“One day at a time,” he said. “I would love to practice more. I would love to have more time, but one thing we pride ourselves on is energy, drive and work ethic and you cannot do that if you don’t have energy so you you cannot be selfish as a coach.

“Because you want to practice you sacrifice what’s most important for the team, which is energy. I think [high performance director] Devin [McConnell] and his group do a really good job this year to kind of give us direction and make sure we stay on top of the energy of our players and so far it has paid off.”

GM Bill Armstrong attended a portion of the World Junior Championship in Moncton and Halifax. He came away very happy with the performances of Guenther and Logan Cooley, two of the team’s most important prospects.

“I will say that you can get a bad read at times, but I’ve been there when Vladimir Tarasenko helped the Russians beat Canada. I’ve been there when Robert Thomas and Jordan Kyrou played unbelievable in the finals to help Canada win it,” he said. “You get a good feeling in your heart because you know that tournament is a really good representation of what they’re going to do in the National Hockey League. You get excited when you see them achieve at the world juniors especially Guenther because not only did he lead his team, he scored a big-time goal.”

As for Cooley, Armstrong felt that outside of presumed No. 1 overall pick Connor Bedard, Cooley was the tournament’s best offensive player.

“Cooley was outstanding,” Armstrong said. “He was pushing the pace.

“He’s a young player so he’s still got things to work on. He’s got to clean up his own zone, he’s got to make sure he plays with more detail. Little things like the backcheck are things that our coaches will put huge value on whether you go out on the ice the next time or not. But outside Bedard, I don’t think there was another player that put up as much offense as he did.”

Top photo via Getty Images: Pittsburgh’s Jake Guentzel celebrates with teammate Sidney Crosby after scoring a goal during the second period against the Coyotes on Sunday.

Clayton Keller riffs on All-Star selections, golf, his gruesome leg injury and the state of his game